It’s time to get some more framing done. We already have framed out the walls of the utility room. This was high on our priority list so that we get a step closer to getting the heating equipment installed.

Next, we thought we’d frame out all of the perimeter walls. This would leave the floor space open, which makes it easier to move around. Our friend Drew liked the idea and so we began to tackle a new framing challenge.

This means we can’t preassemble the framing like we did for the interior walls. Instead we have to hang each stud from a floor joist above. Because the hanging studs will bear the weight of the drywall, we used heavy duty screws for the stud-to-floor joist attachment.

Another concern was to prevent the bottom of the framing to swing out into the room (just in case that someone wants to yank at the wall). Our solution was to attach about every fifth stud with a masonry anchor to the brick wall.

To prevent thermal bridging at the anchoring point, we sandwiched a section of 1 inch ISO insulation between the brick wall and the framing. 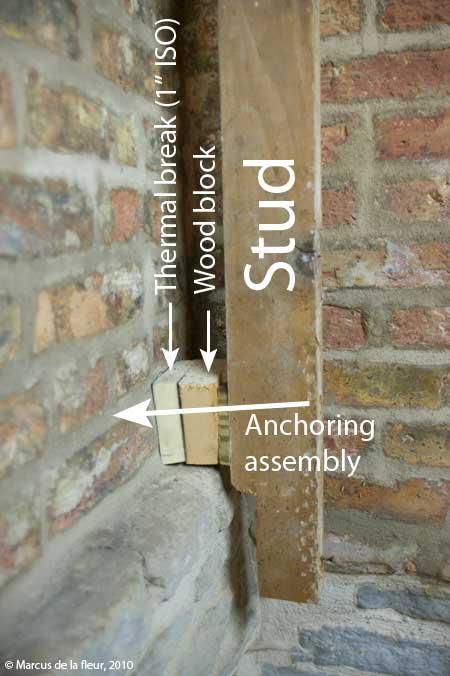 Last but not least we connected all studs with a horizontally placed two-by-four at the bottom, which in effect turned the assembly into one rigid unit. We tried some shaking and yanking, but it didn’t move a bit. I wonder if we over built it?

You may have noticed in the photograph above that there is a gap between the stud and the brick wall. That gap is about three inches and is an important thermal break. 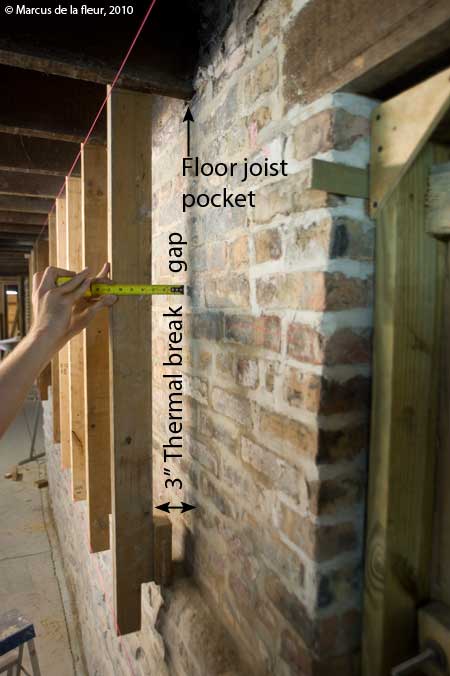 Offsetting all the studs by those three inches provides us with an uninterrupted vertical plane across the brick wall. That uninterrupted plane will be insulated with spray polyurethane foam (SPF), creating an effective thermal and air barrier.

The only thermal break that remains is the floor joists that are pocketed into the brick wall – although they may not represent a significant thermal break.