Let’s step away from the bathroom and tiles. We still have some serious work in the living space that requires our attention. Let’s start with a look at the ceiling.

The three inches of open cell foam provide us with an airtight ceiling. Yes, this layer as well as the rock wool will slow down heat transfer, but the other function that we are really after is sound control between the first floor and basement.

Both products, the open cell foam and rock wool, have sound reducing properties. Reading through the product specs, I came across the term ‘Sound Transmission Class’ (STC).

I learned that STC measures the transmission of airborne sounds. I could not find any reference to the STC scale range, other than that the higher the STC, the greater the sound transmission reduction. The International Building Code of 2006 requires an STC of 50 between dwelling units.

The open cell foam, according to the product specs, should provide an STC of 37 in a 2 by 4 wall assembly. The rock wool offers an STC of 45 under the same conditions.

We don’t have either product in a 2 by 4 wall assembly, but rather in our ceiling, and I am not sure what their combined STC would be. What we did notice, though, was that we could no longer freely communicate through the ceiling.

“Even though a joist floor has a good IIC rating, footstep sound with a frequency of less than 100 Hz can still be annoying to the people below.”

“The higher the IIC, the better the attenuation of impact sound, with 50 usually considered the minimum rating for occupant satisfaction in residential buildings.”

Even though I came across an interesting IIC ratings catalogue, I could not find a firm rating for our scenario.  I assume, through interpolation of the data, that we should be somewhere around IIC 50. However that would not take into account the three inches of open cell foam, but assume the use of a resilient channel. 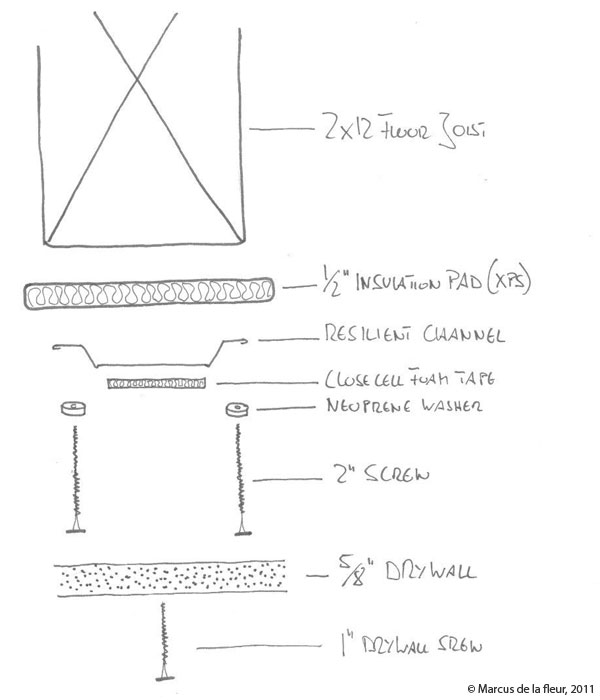 This is where I came across the resilient channel concept. It is basically a metal furring strip that allows us to decouple the drywall from the floor joists, and as such reduces the structure borne vibration transmission (i.e. the sound of footsteps).

Boy, they were not kidding when they put the science into building science. How about leaving the brain behind and getting the brawn involved?

I don’t know what IIC rating our floor/ceiling assembly would yield. I assume that it will get us above the critical 50. And if we use runners on the first floor in the high traffic areas, we should be in great shape.

PS: Thanks to Drew for his help with the installation!