Let’s go back in time for the next posts. I would like to dissect the plumbing system some more. A good starting point is the drain-waste-vent (DWV) plumbing.

I described the PVC to CISP connection and the DWV basement installation. But I said little about the rationales and layout other than the discussion about the new CISP sewers and the check valve location.

The moment we look at what goes down the DWV plumbing, sustainability creeps into the picture. As the name suggests (drain-waste-vent) we are talking about draining waste water. Although, not all waste water is equal.

… is the term coined for the waste water we flush down the toilets – water that contains fecal matter and urine. Blackwater requires processing, typically in a waste water treatment plant, where pathogens and organic matter are removed. Only then and once disinfected is it safe (from a human health and safety aspect) to release into the environment.

There are a number of other, ecologically sound, smaller and/or decentralized blackwater treatment options such as constructed wetlands and the ecological engine, which have been widely researched and published.

… is the watered down cousin of blackwater. By definition it cannot contain human waste.

Greywater typically originates from the sinks, showers, bathtubs and washing machines of our homes. Because it carries lower levels of contaminants, it has a lower health risk.

As such, greywater can be recycled and reused. Typical applications for recycled greywater are landscape irrigation and indoor reuse such as toilet flushing. Outdoor use, and more so indoor use, may require some level of filtration.

We know about, and often practice, recycling – extracting another use out of a resource rather than letting it go to waste (pun intended).

Greywater is a resource that has recycling potential, given the right plumbing layout. Rather than having one DWV system that drains everything, it can be structured to separate blackwater from the recyclable greywater. 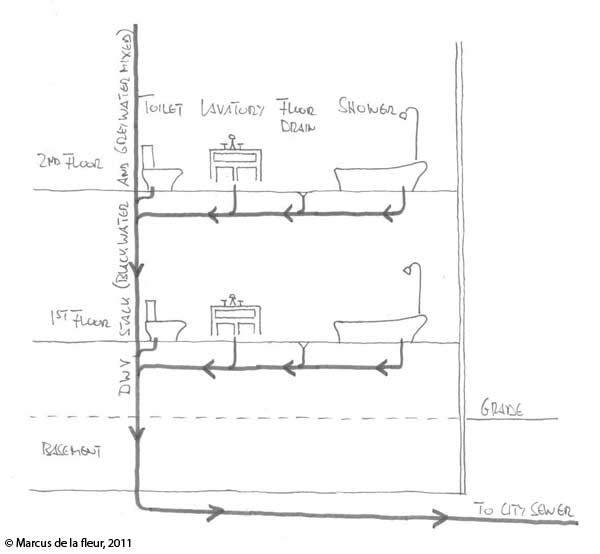 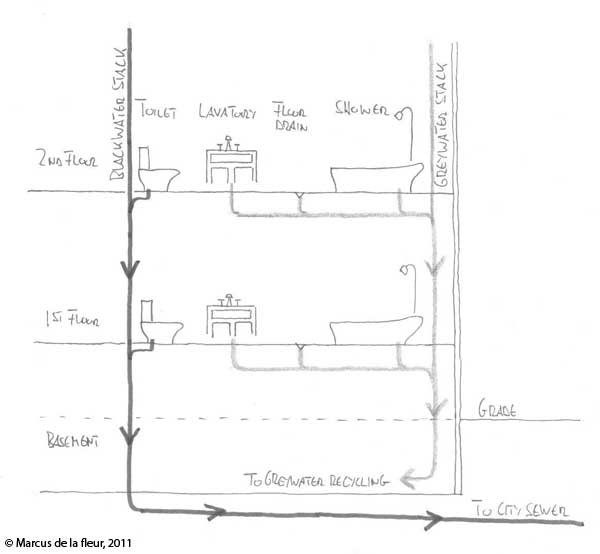 There is one minor problem, though. Our plumbing code in the city of Chicago does not allow the reuse or recycling of greywater, point blank. The Uniform Plumbing Code prohibits the use of greywater indoors.

I don’t think it takes a visionary to figure out that, given increased pressure on our natural resources, the current policy must expire sometime in the future.

Anticipating the policy change, we would like to avoid opening up walls to get to and modify our DWV system. Instead we would like to proactively structure our stacks and sewers for easy adaptation of greywater collection once it is permissible.