We had another record-breaking rain in Chicago. Close to 7 inches, and the majority fell within a few hours Saturday morning, starting around 2:00 a.m. The city’s combine sewer system was overwhelmed, leading to widespread basement flooding.

That included our basement! Yep, we had about two inches of water, maybe three, all despite our flood prevention measures. So, how did this happen?

Well, I was slacking with my maintenance tasks.

We did install a check valve, that protects the garden unit against flooding, basically preventing water from an overwhelmed city sewer to push into the basement. But the valve didn’t close. It got stuck in the open position, and we had the water pouring into the garden apartment through all of the floor drains.

I was warned that a check valve is not a fail-safe protection against flooding, because it requires regular maintenance – at least once a year. I thought I had taken care of that maintenance.

When we moved in at the end of February, I opened up the valve for inspection. Everything looked sparking clean and like new. Of course it did, because we had not yet used the sewer system!

Fast forward five months, and the hinge of the valve flapper is covered with crud and debris, preventing it from opening and closing with ease. That is why it got stuck in the open position.

Now, after we got flooded, I thought it was about time for proper maintenance. I dissembled the hinge, removed it and the flapper, brushed all the crud off, cleaned everything, greased everything, reinstalled the flapper and hinge, and greased some more. That flapper is now moving really smoothly on that hinge! 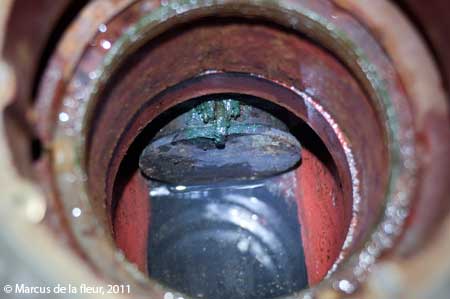 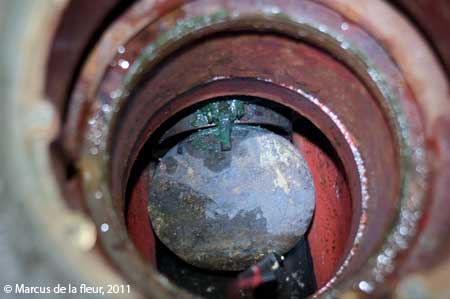 How bad was the damage to our garden unit? We are glad to say that is was very, very minimal.

Cathy was on a mission the moment the water began to push out the floor drains. Within two minutes everything critical was off the floor. That included our nice throw-down rugs.

Because there is always a risk of flooding in a garden unit apartment, we took extra precautions beyond the check valve. Those included keeping everything electrical off the ground, using cedar for the bottom plates in the interior walls and installing cement board, not drywall, at the wall bottom.

This all meant that once the water receded, we just had to mop and disinfect the floor, set up and turn on the dehumidifier, and then let everything dry out. That’s it.

I never was really that happy with the transition from the cement board to the drywall on the interior walls. Even after the taping, mudding and painting, you still can detect the slight change in texture between the two materials. We also ended up with a fine line or fissure where the two materials interface.

Believe me, after this flooding experience, I discovered a distinct beauty in the little fissures and the texture change.