This is one part of the drain-waste-vent (DWV) system that I found peculiar.

I was ready to punch a new hole into the roof for the new DWV system roof vent. Mariusz, our plumber, advised against it: “Why don’t you just reuse the roof penetration at the original vent?”

Well, because it sits four feet over from where our new sewer stack is coming up, and because I don’t know how to remove the old cast iron vent without wrecking the roof.

“All you need are two 90 degree elbows and a four foot straight piece of pipe to connect the new stack to the original vent location. And with the help of a long drill bit and your Sawzall you can cut out the old vent and replace it with a new one.”

Except that the DWV roof vent is not just an extension of the four inch pipe sticking through the roof. Chicago plumbing code requires that the stack be increased by one pipe size where it transitions to the vent, right under the roof deck.

In other words, I go from a four inch stack to a five inch vent pipe. The rationale is, as Mariusz explained, that the increase in the pipe diameter helps the sewer gasses to escape.

I visualized a fancy piece of plumbing when I heard of the roof vent requirement, and was surprised when, at the plumbing store, I was presented with a simple four inch to five inch increaser cemented into a 24 inch long piece of five inch pipe. 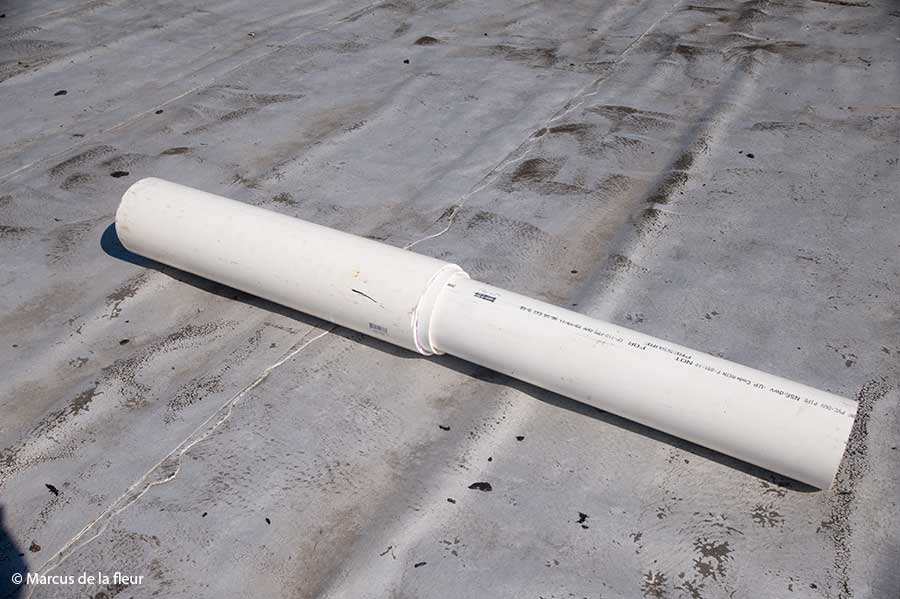 I was reassured that this was indeed a code compliant roof vent.

In a dare devilish mood, I decided that while the warm and dry weather lasted, I would remove the old cast iron roof vent.

I began drilling, and I got the Sawzall out, but did not get very far. There was just way too much tar plastered onto and around the vent. This had brute force written all over it, so I got my mason hammer and started to chisel and chop away at the tar. 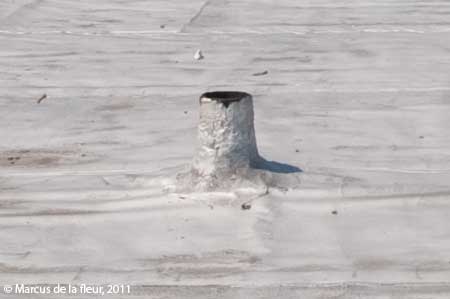 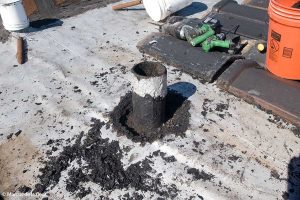 The layers of tar seemed never ending, but after about an hour, I had removed enough to be only an inch or two away from the roof deck. I got the Sawzall out again and soon had the old vent loose and removed. 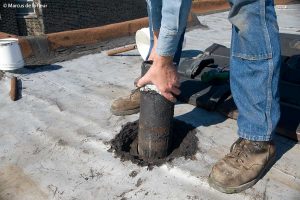 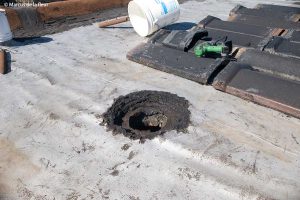 My new vent did fit right in, and I got a nice aluminum vent collar with a EPDM boot. I cemented the assembly in place, clamped the EPDM boot to the vent pipe and I was done! 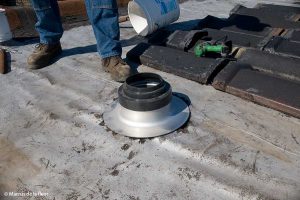 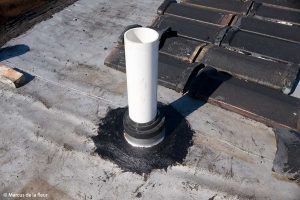 Not so bad after all – and even better – it saved me from an additional roof penetration.

The only thing that worries me now is the three and a half inch layers of roofing build up. Getting all that stuff of when we are ready for the re-roofing will be interesting…