The smallest fuse for residential applications is rated 15 amp, which should take care of most typical loads, in particular when Energy Star rated devices and appliances are used. On occasion, a 20 amp circuit may be required, either to accommodate an appliance with a slightly larger load, or a lot of small devices that will all run at the same time.

All of this was discussed in detail with our electrician Percy Harrison, in preparation for the layout of each circuit. Two sets of information were of great help in that decision making process:

Our past history of electrical consumption (fluctuating between 200 to 250 kWh per month).

An account of what appliances and devices with what load go where.

We decided that 15 amp would be more than enough for most circuits, and that includes the mini-split, which comes at a recommended fuse size of only 15 amp. There are three circuits though that we put on a 20 amp fuse, which is the largest load we have.

All GFCI outlets in the kitchen are on a 20 amp circuit, to accommodate kitchen appliance with larger loads, such as a crock pot.

We put the dining room on a 20 amp fuse, again to be able to accommodate items such as a crock pot on Thanksgiving.

And last but not least, we have one outlet right under the circuit breaker panel that is on its own 20 amp fuse. That outlet would serve larger loads such as a floor sander. 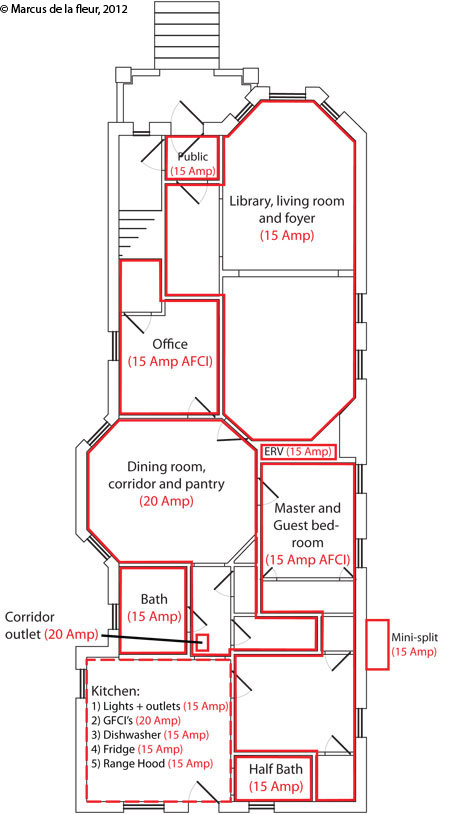