A couple of things have become handy:

That knowledge makes the upcoming task of pulling the wire a little easier and more organized. Still, I decided that it would be wise to let our experienced electrician (Percy Harrison) lead the task and reserve the observer and helper role for myself.

I had bought a 60 foot fish tape a while back, knowing that I will need it one day to pull wire. Imagine my surprise when Percy began the job with no fish tape in sight. He actually did not pull the wire, he just folded the ends over and pushed it!

This is way faster than tinkering around with the tape. That said, there is a limit to pushing the wire. Once the conduit gets crowded, or with a long conduit run that has a lot of bends, the fish tape is the only way to go.

It didn’t take long for me to get overwhelmed by the amount of wires sticking out each electrical box. 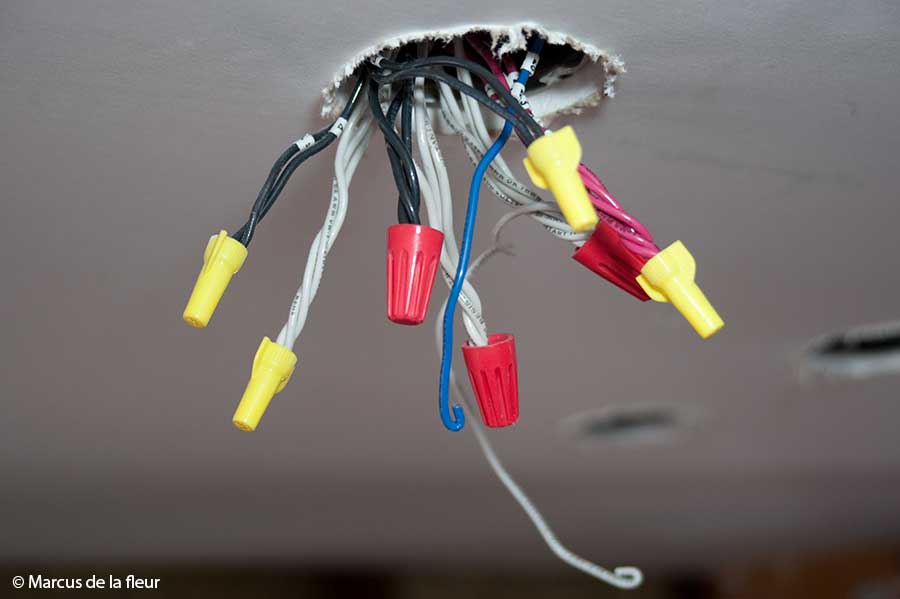 Power to each room is provided with a hot (typically a black) and a neutral (a white) wire that arrives in the ceiling box. From there connecting wires are run to each light, light switch and outlet.

Percy seem to know exactly which wire was for what and began to splice them together. I didn’t go near a ceiling box, but rather tested my splicing skills at electrical boxes for outlets and light switches, where I could count the number of wires on one hand. 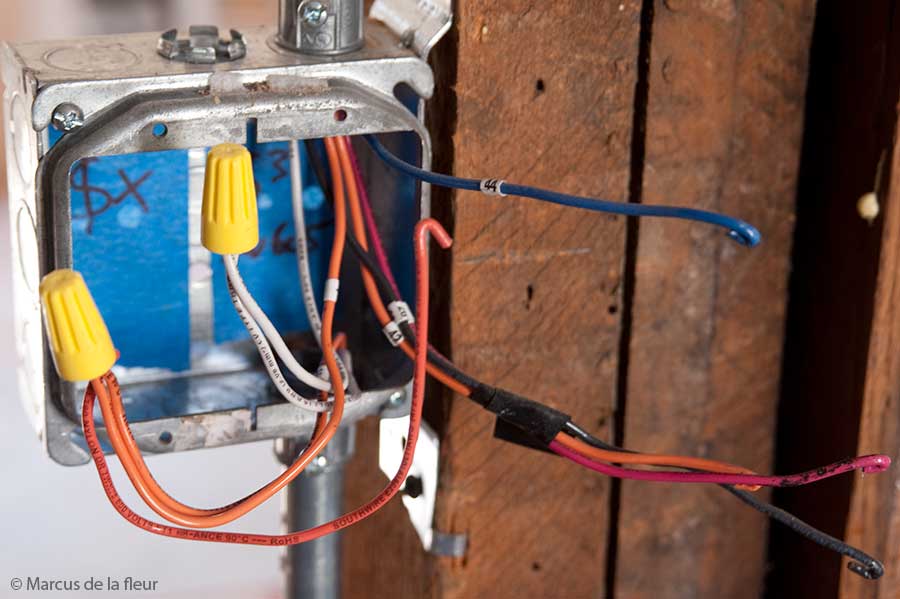 Because I felt it was nearly impossible to keep track of what wire did what and went where, I decided it was a good idea to label them with little wire tags. I think Percy was amused by my outbreak of paranoia, although he didn’t show it. 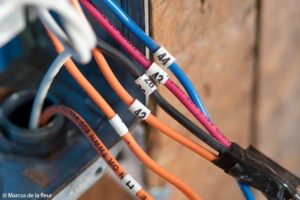 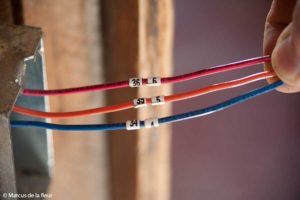 Was this really necessary? With an electrical layout that is intuitive, follows standard professional practices, and is well organized, probably not. The upside of labeling all wires was that I really began to understand the system and I now know it inside-out.

With everything spliced up and all wires labeled, there is only one spot left that may appear overwhelming: the circuit breaker panel. Here we still have have a seemingly unorganized jungle of wires.

I knew how many and what kind of fuses to get, because we had planned the load management prior to pulling the wires. We slipped each fuse into its slot, making sure that we kept the system balanced across the two phases.

Connecting the wires to each fuse turned out to be straightforward, thanks to my labeling effort.

It’s time for me to get some mud rings for the electrical boxes, and hopefully, before too long, install the lights, outlets and switches. Although, there is that thing called drywall that I first have to take care of.