It’s time to install the radiators – for a second time.

The first time around was a dry run (pun intended). We pressure tested the radiators, the tubing and all connections to make sure they are tight and hold 40 psi.

The idea was to have the system tested once the drywall is up, but before the taping and mudding. If there was a leak behind the drywall, it would have been relatively easy to fix it.

Once the system was airtight, we took the radiators back down and out of the way to proceeded with the taping, mudding, priming and painting. Now that this is all done, the radiators can go back up, this time for good.

There is one complicating factor that is not to be ignored: the thermal expansion of the radiators.

I found guidance on how to deal with the expansion in the installation instructions for the radiators:

“Radiators expand a maximum of 0.016 inch per linear foot of length if heated to 215°F. Piping attached to the radiator must provide the necessary expansion compensation.”

Looking at the dining room, this would translate into 1/16” expansion for each of the 44” radiators left and right, and about 1/8” expansion for the 76” unit in the middle. That is, if they are heated to 215°F.

The temperature of our heating system is set to 120°F, to have it compatible with a solar hot water system. 120°F will result in less thermal expansion than 215°F. How much less? I don’t know.

Bottom line, with a maximum expansion of no more than 1/8” between each radiator unit in the dining room, we shouldn’t encounter problems with the hard piping.

The radiators in the library may be more of a problem.

Here, I have one 148” long unit. To absorb any expansion from the long radiator, I used stainless steel flex tubing at both ends. 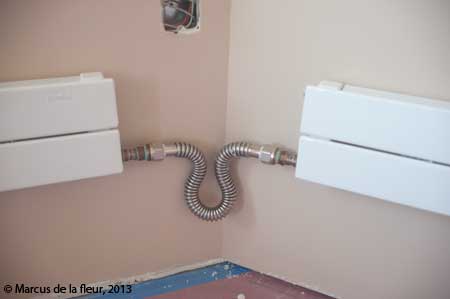 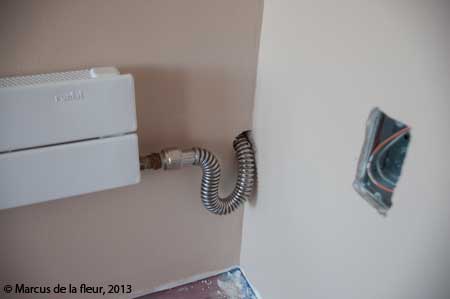