The radiators are installed, including a flex connection. It’s time for another round of pressure testing. I am not sure how I feel about this because I am still haunted by the last round that left me with plenty of gray hairs.

If there are any leaks in our 1st floor hydronic heating system, I wanted to find them with air pressure and not after everything is filled with water. It is much easier to fix leaks when you don’t have to drain the radiators and supply lines.

I made sure I used the pressure gauge valve that didn’t leak, got our bicycle pump out, and put 40 psi into the system. Next step: isolate all the zones by closing the valves at the manifold in the utility room – and the waiting game began. 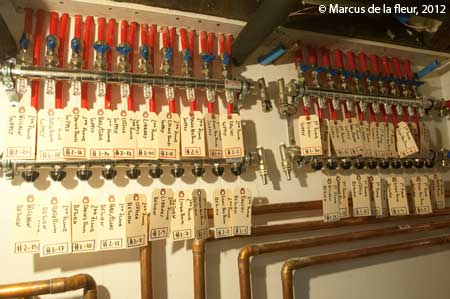 I took my time. Rather than getting into a panic about every pressure drop, I took a day or so to think it through first. The result: a targeted leak tracking and elimination. 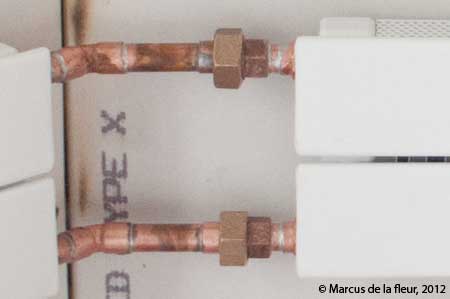 The unions typically hold up very well. Leaks I found were mostly limited to the threaded connections at the radiator, despite the use of Teflon tape and paste. Some of the leaks were minute, like 1 psi pressure drop over 24 hours for one heating zone (i.e. the dining room). But no matter how minute the leak, some soap water spray will drag it out into the open. 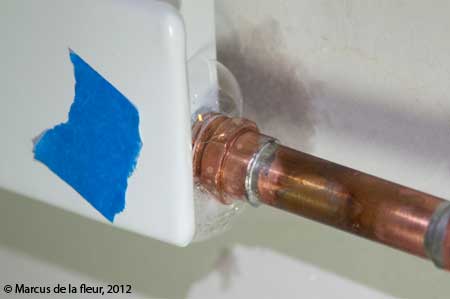 After a couple of weeks of hunting down leaks (I really did take my time!), the system was airtight, which should equate to watertight. That means, it’s time to…

First step: turn off the thermostats. The pumps should remain off while I initially filled the system with water, and it should be filled with cold water first. That means I also needed to disconnect the buffer tank thermostat from the control panel. That way the boiler doesn’t know about the cold water and won’t have the urge to fire up.

Second step: Opened the zone valves at the manifold in the utility room. Well, because this feels like the point of no return, I very slowly opened those valves, listening for something going awry. And there are a lot of noises with the water pushing around and out the air. For a good hour, I was going around from radiator to radiator, bleeding air.

Step three: Get the pumps back running and hot water into the system. This was easy. It just took reconnecting and re-employing the thermostats. Once the pumps kicked in the air hiding in the high points of the system got pushed around, in part to the the automatic bleeding valves on the buffer tank and the main pumps. Those valves were hissing pretty good. Still, I had to do my radiator round bleeding air from each unit.

The 1st floor radiators were sized based on a building envelope insulation of around R-28, an operating hot water temperature of 120°F, and triple glazed windows.

Everything is in place except the triple glazed windows. The existing double pane, double hung windows don’t have the greatest U-value (insulation value) and are pretty leaky. That worried me because I wasn’t sure if the radiators would keep up with the mediocre performing existing windows.

Well, let me put it this way: The heating system is certainly not undersized. The radiators have no trouble keeping the 1st floor warm … so much so that they come on a lot less than I expected!

I checked the mixing valves in the utility room, and the hot water temperature delivered to the radiators was indeed 120°F. I don’t think that our insulation performs better than the targeted R-28. It is more likely slightly less than that due to the inevitable framing.

May be the sizing of the radiators was rather generous? This is something I want to revisit before we get to the 2nd floor. I see potential for tightening up the math!

1 thought on “Radiator start up”