One problem solved and another one created.

I have figured out how to insulate the attic but find myself face to face with a significant spatial challenge.

Our attic is defined by the 2 by 10 roof joists on the top and 2 by 6 ceiling joist on the bottom. As you can see in the graphic above, the attic has the shape of a long drawn out triangle.

Even though our roof would be considered flat, it still has a slope from the north to the south. Because of that pitch, the attic measures three feet tall at the north end of the building, but diminishes to nothing at the south end. 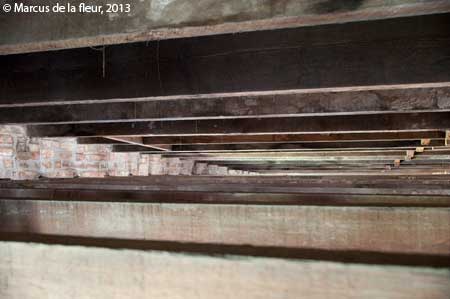 It is that “nothing” wherein I found the problem. I plan to fill the space between the 2 by 10 roof joists with three layers of rock wool. That will be difficult towards the south of the attic as that space is partially taken up by the ceiling joists.

Not only that, but I lack the space for the four inches of rigid foam board insulation that I need to attach to the bottom of the roof joists.

Following some procrastination, I settled on the fact that I will have to lower the ceiling toward the south end of the building to accommodate all 14 inches of attic insulation.

Another factor that nudged me toward this decision is that I also have to accommodate some duct work for the ventilation system. We successfully accomplished that on the first floor by lowering some ceilings and I plan to do the same on the second floor.