Has the cabin fever set in by now? If so, let me lead a quick expedition into the hot and muggy summer months. Even though we may yearn for summer heat at this time of the year, once it is upon us, we are rapidly looking for ways to keep cool. How do you keep cool?

I dislike the typical excessive air conditioning we exercise, but I am a big fan of ceiling fans.

You could argue that any ceiling fan would do a good job as it is most likely to operate more efficiently than a conventional air conditioning system. This comparison is somewhat unfair as the product of air conditioning is different from that of a ceiling fan. But then again, humanity is famous for buying products that are non-essential.

We needed to make a decision about what ceiling fans we should acquire for our deep energy retrofit. I started by looking at the extremes. On one end there is the $25 product, cheap but flimsy, “delightfully” humming along while it moves air (for all those lovers of white noise), and dumping the one thing from the motor and light that we want the least – heat.

On the opposite spectrum is … well, other than expensive, I don’t really know. This is a good time to consult the EnergyStar product list for ceiling fans. 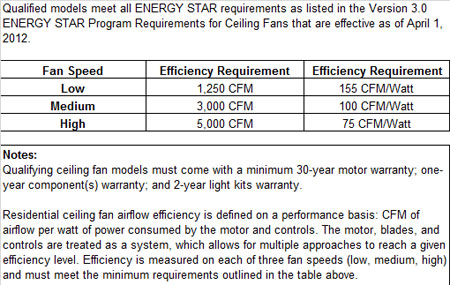 EnergyStar rates the efficiency of ceiling fans by how much air they move (cubic feet per minute or cfm) with one watt of energy. If you download the list of certified ceiling fans in Excel format, you can easily sort for the most efficient EnergyStar certified models. Here is a summary of the top three contenders as of February 2014:

Back to the top three contenders that were all easy to track down. The Haiku and MidwayECO are built with the efficient and very quiet electronically commutated motors (ECM’s). I assume that the Aeratron is also powered by an ECM, but couldn’t find corroborating information in the specifications.

The Aeratron is a ceiling fan unit only, while the Haiku can be fitted with a 1,500 lumen LED light module. The Midway ECO comes with a light module that takes four LED or CFL bulbs with the GU24 pin base. Tthe typical light output would be around 3,600 lumens. The Haiku can be dimmed as can the Midway ECO, as long as dimmable LED or CFL’s are used.

Prices for the models vary widely as of February 2014:

Because we need dual functionality from our ceiling fans (air movement and light), the Midway ECO emerged as the best contender, even though it is still a very pricey piece of equipment.