I finally got around facing the intimidating task of adding extensions to the bottom and top of our replacement pocket doors. And because our friend Drew plays the enabler, there was no starting the job without him. 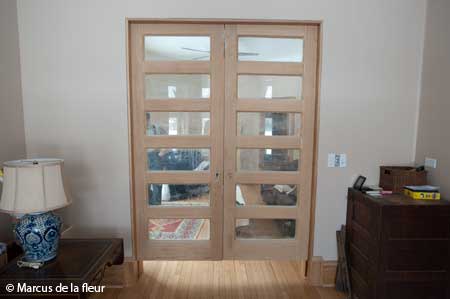 The top extension holds the rolling mechanism and has the rest of the door hanging on it. And those doors are heavy! To prevent the them separating from the extensions, we had to rely on some sturdy hardware and a fair amount of wood glue.

We also made sure that the extensions were a tiny notch wider than the door. That allowed us to sand them down and have a perfectly smooth transition between the old and new.

The finishing touches were followed by lacquering the doors. Of course we used a water based and VOC free product (Acrylacq by AFM Safecoat). While the lacquer was curing, we could start thinking about hanging the doors and getting the rolling mechanism to work.