Don’t let the blog post title fool you! I am still thinking and talking about our yard and vacant lot.

We have a yard, but you can’t call it a garden – yet. So what do we use it for? In the early days, during the deconstruction process, we staged the dumpsters in the yard. 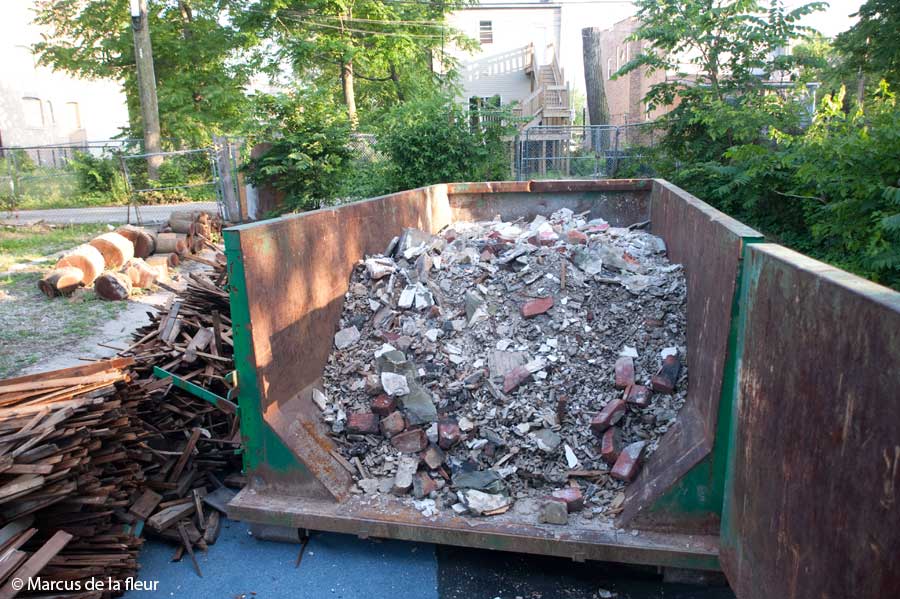 Some yard space was repurposed into a material storage depot – which brings me to the graystone treasures.

We lost two vacant graystone buildings on our block in a massive fire during Thanksgiving night 2010. We didn’t live in our building at the time. But I stopped at the house to take care of a couple of tasks the day after Thanksgiving and was shocked by sight of two burned out building shells.

The good news is that no one was hurt and the nearest occupied building was evacuated and saved.

The burned out building shells were declared dangerous and emergency demolition started within one and a half days. With the demo crew came a team of brick salvagers. Rather than having the Chicago common brick dumped into a landfill, the salvagers pick the bricks out of the piles, clean the mortar off and stack them onto pallets. That is the kind of brick I can then buy for masonry repairs. 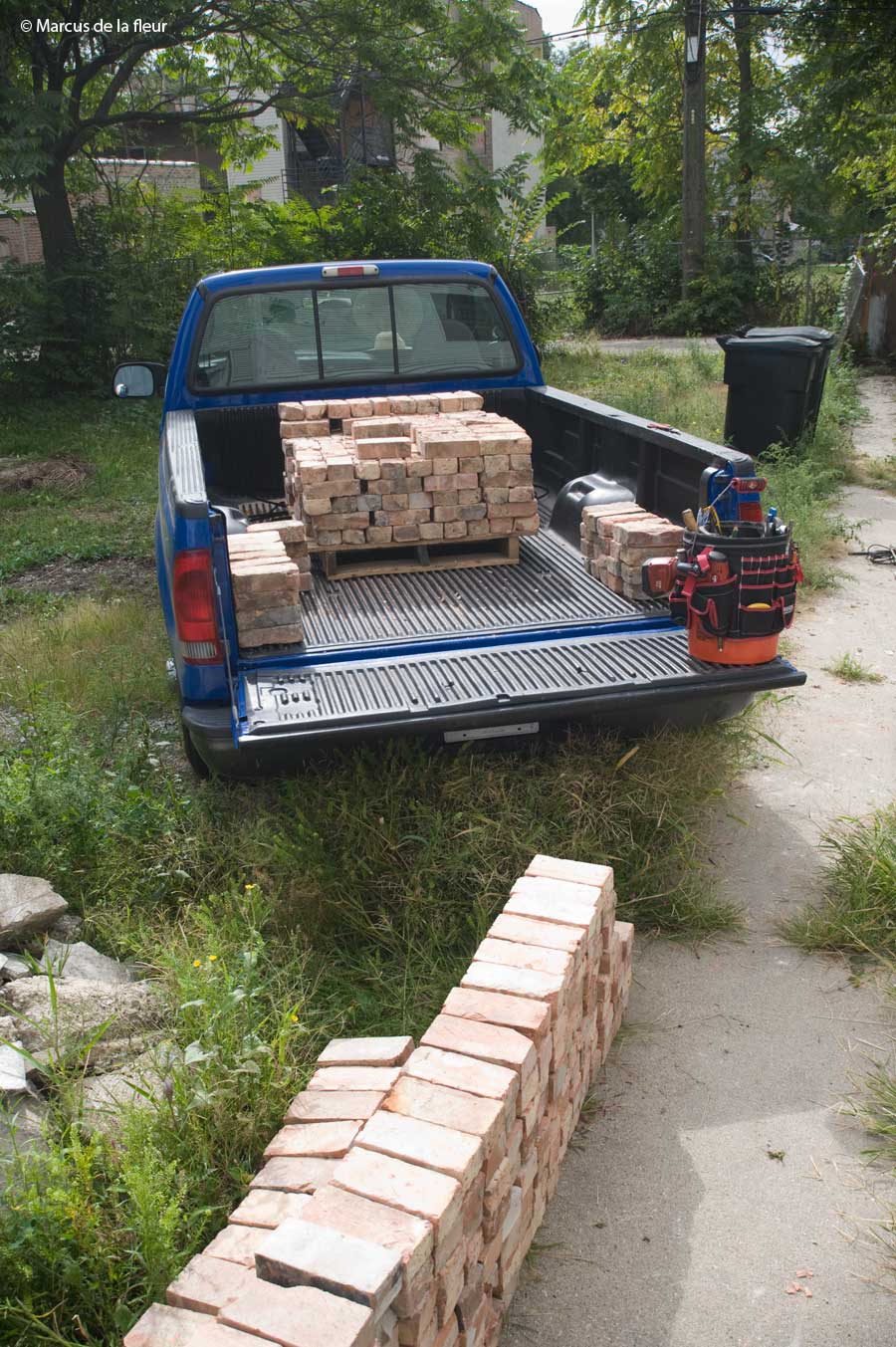 What nobody was interested in, to my surprise, was all the graystone from the building facade. It didn’t matter whether they were window sills, steps, plain graystone, carved graystone, columns, or ornaments.

The demo crew was happy to let me pick out those pieces. Less weight for them to haul off, and with that less tipping fees.

One of the buildings had beautiful carved front porch columns that, despite being knocked over, remained intact. 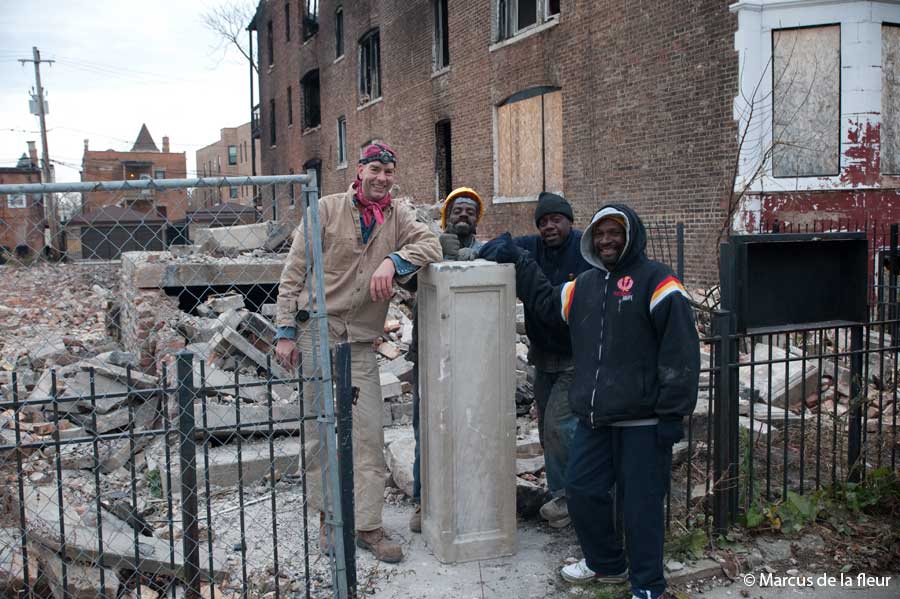 But boy, were those suckers heavy! At first, Cathy and I attempted to wrestle them with a dolly. Needless to say that we decided otherwise before either of us or the dolly got crushed.

I decided to replace the dolly with the truck and recruit as many strong help hands as we could reasonably fit around the big columns. Even with the amount of muscle, it was still a daunting task. To move the columns, we had to set them upright and swivel them inch by inch towards the truck. 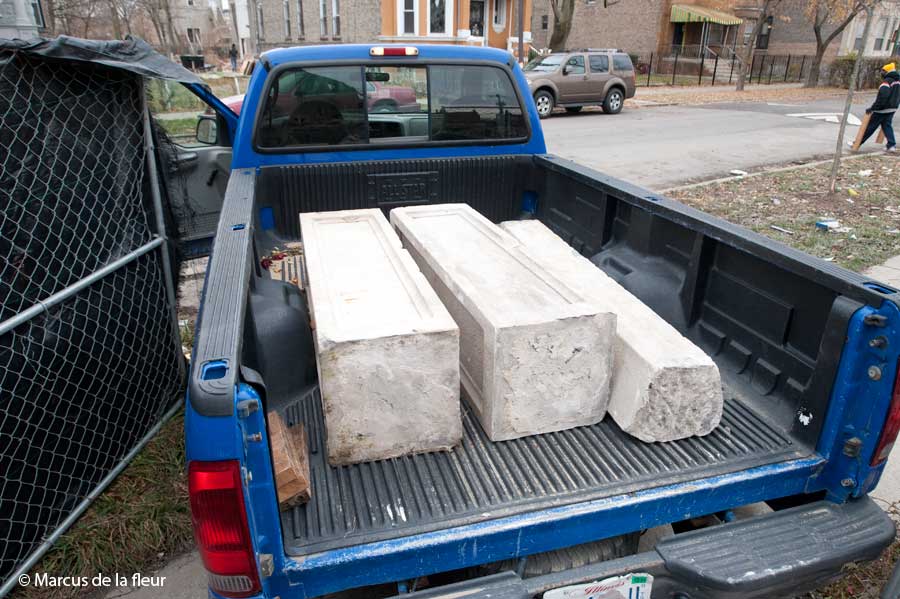 Two columns and a sill was all the truck could take in one load. Each column must have weighed about 800 pounds.

Back in the yard, sliding the monsters off the truck and laying them down was a little easier than loading them.

We plan on using some of the pieces on the house, like the steps and some of the facade stone. Other pieces will probably become part of the garden, like those big columns. I am just happy that I was able to score those treasures, and safely transport them into our “material storage depot.” 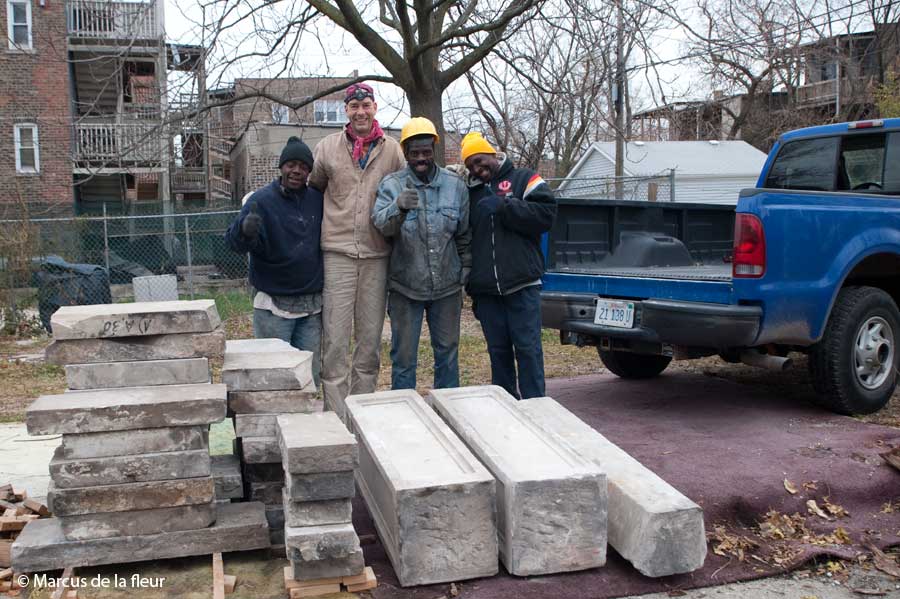 The big question is – for how long will it remain a material storage depot?