Sometimes I get these seemingly insane ideas, only to find out later that they were somewhat rational. The subject matter of those ideas is typically not my strong suit. That’s why I tend to be infuriatingly quick to dismiss them.

Air conditioning is on my list of subjects that are not my strong suit. I grew up in Germany, where air conditioning is virtually non-existent. I ran into active cooling for the first time while visiting the Caribbean, and again years later when I moved to Chicago.

I regard summer air conditioning in the Midwest as a necessary evil and have a pronounced dislike for the temperature extremes we have to tolerate between the outdoors and conditioned indoors. I dread stepping into a grocery store or office building that feels like an ice box.

Since we started our deep energy retrofit, I’ve had to wrestle with the question on how we will keep cool during the dog days of summer without creating an ice box. I quickly learned that “cool” is somewhat secondary. The primary problem to tackle is how to keep the relative humidity at a comfortable level, i.e. under 60% (preferably at 50%).

We already have an Energy Recovery Ventilator (ERV) that supplies fresh air into the house, yet keeps the outside heat and mugginess at bay. My seemingly insane idea was to install an air-to-water heat exchanger in the fresh air supply duct to remove humidity through condensation, and deliver pleasantly dry air into the house through the ERV duct system.

Simply put, I wanted to run the muggy outside air across a cold air conditioning coil to dry it out. But I was told that there was no such air conditioning device that could be combined with an ERV. Yet, I clearly wasn’t alone with this idea.

Just in the past couple of years I started reading about ‘Magic Boxes’ that basically combine the function of an ERV, or HRV (Heat Recovery Ventilator), with that of a small air-to-air heat pump, i.e. a small air conditioner. 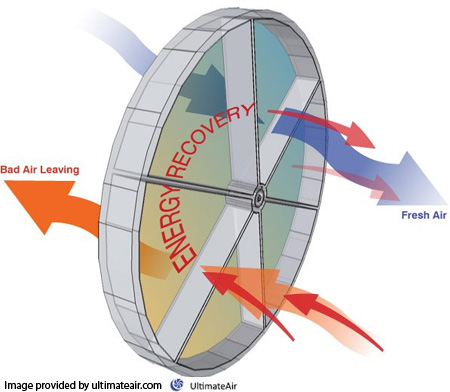 Unlike our ERV, which uses and enthalpy wheel as a heat exchanger, a Magic Box uses an integrated air-source heat pump to transfer thermal energy between air streams. But they also can provide some additional limited conditioning – additional cooling (and drying) as well as heating.

One company (Build Equinox), located two and a half hours south of us, brought the CERV (Conditioning Energy Recovery Ventilator) to market just a few years ago. The CERV has an advertised heating capacity of 3,850 Btu/h, and cooling capacity of 2,400 Btu/h. These numbers vary depending on outdoor temperatures. One article listed a price of $4,500 for the CERV.

A competing product is the Boreal 12000 by Minotair out of Quebec, Canada. This Magic Box is more compact than the CERV and, in heat pump mode, has a listed heating and cooling capacity of 9,400 Btu/h and 8,700 Btu/h respectively. I read one article that pointed to a price of around $3,200 for the Boreal 12000.

Either the CERV or Boreal 12000 could be used instead of an ERV or HRV.

In this function, the air-to-water heat pump would basically function as a chiller. But it could also reverse its cycle and produce hot water for domestic hot water consumption or a hydronic heating system.

The challenge would be to find a right sized unit that I could combine with our ERV, and that would be affordable. If you thought the CERV or Boreal 12000 were expensive, prepare yourself for a sticker shock while shopping for air-to-water heat pumps.

Nevertheless, I feel vindicated that my idea wasn’t that insane after all. But it has only brought me somewhat closer to a solution that would provide cooling and a comfortably low relative humidity during the dog days of summer in our deep energy retrofit.