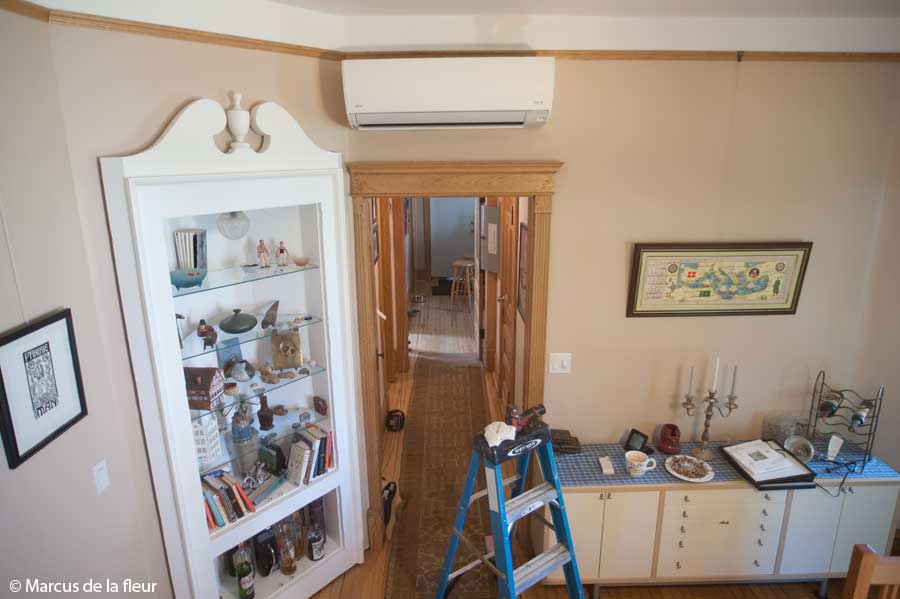 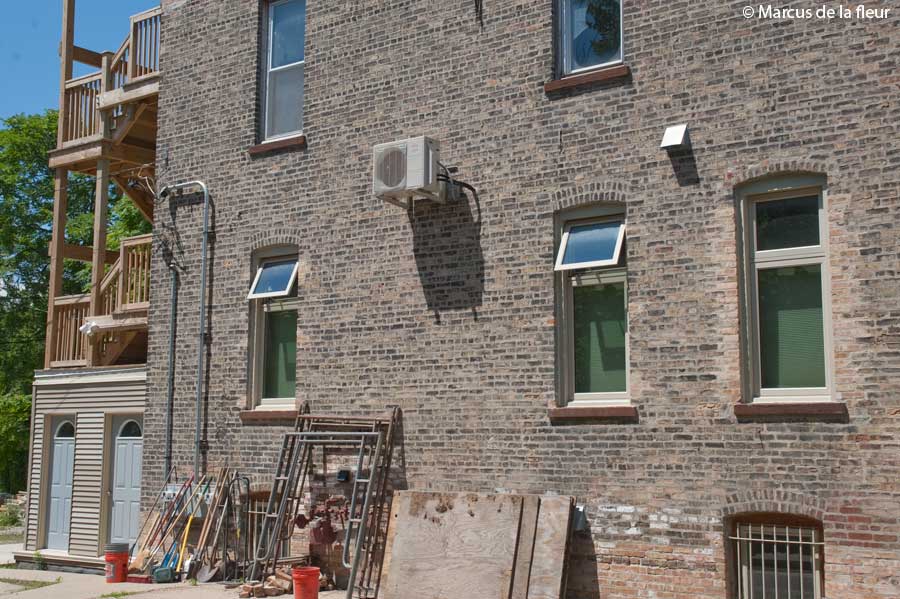 While the vacuum pump is cranking away, let’s take a look at the indoor unit installation.

The indoor unit is also referred to as the evaporator, because of the phase change that takes place in the refrigerant when in cooling mode. It is a box (compact wall unit) measuring roughly 36 by 12 by 12 inches. 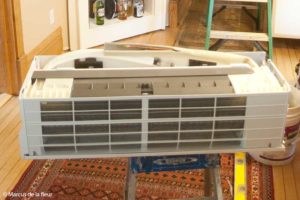 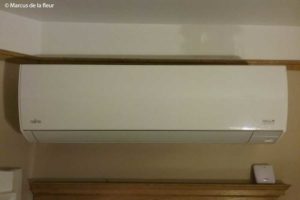 The location of the compact wall unit had been determined during the rough-in. We placed it centrally located on the south wall in the dining room. 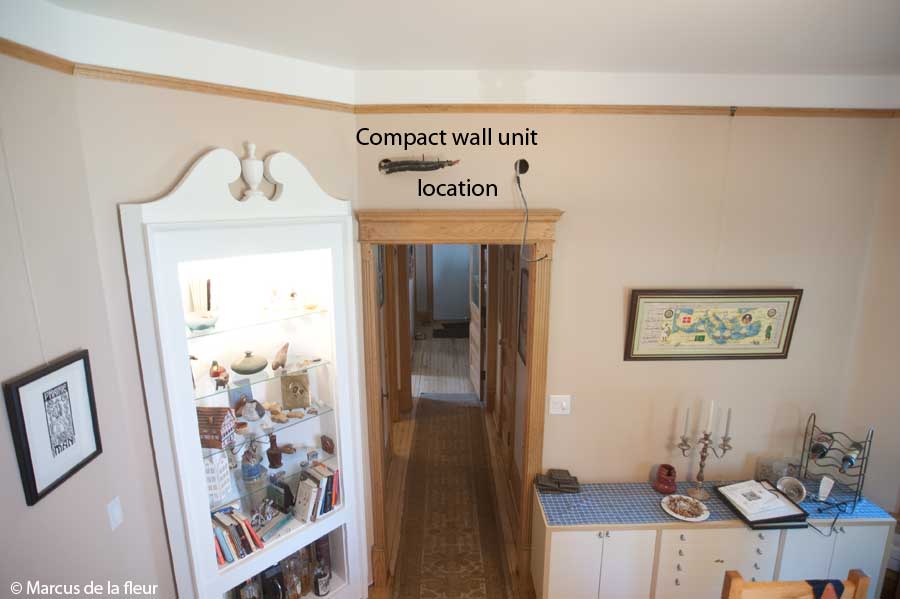 The central location is key as there is no duct system that distributes the cool air (thus the term ductless minisplit). But with the cool air discharged from the compact wall unit in the dining room, it also reaches the living room, bedrooms and kitchen. That said, we may need to use a fan to facilitate the distribution of the cool air across the rooms.

Our installer, James Pruyn, started by mounting the wall hook bracket onto which the compact wall unit will hang. 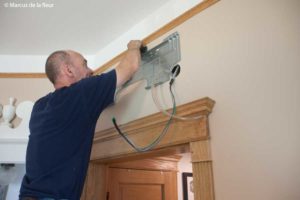 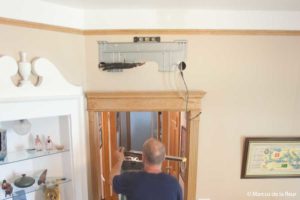 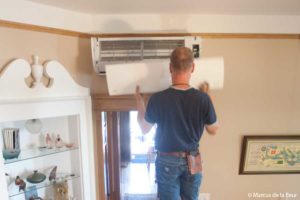 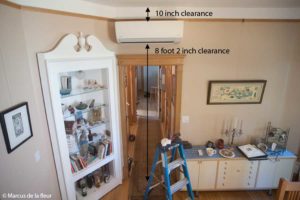 During the installation, we ran into a couple of flaws in the compact wall unit that are worthwhile mentioning.

The screws on the electrical terminals for the wire connections stripped. Thanks to James’ improv skills, we managed to get the wires safely connected after all.

At the end of the installation, James advised me to keep a very close eye on the condensation line once I turned the minisplit on. He connected the line from the wall unit to the line I had roughed in. But he pointed out that the provided barbed connection was very flimsy and suspected that it may leak.

And he was spot on. The connection was not watertight. Our solution was to fit a barbed coupling into the flimsy barbed connection that came with the unit. We got it watertight with a little bit of teflon tape and a screw clamp.

How do I prevent the minisplit outdoor unit from multiplying overnight?

Usually the outdoor unit is mounted on the building near ground level, but above the snow line, where it is easy to access and service. While visiting Sweden this summer, I saw a number of cottages with minisplits installed just that way. 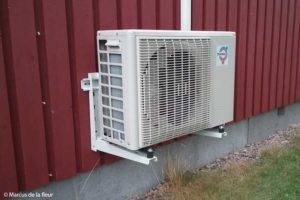 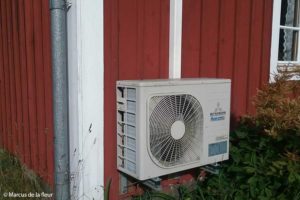 I am inspired by this but won’t attempt to duplicate it, because I am in Chicago. Some people may label a minisplit “green” because of its efficiency, and others may just see green when looking at it – green like Benjamin Franklins. I may be left with just the minisplit shell in the best case scenario, or with an outdoor unit that grew legs overnight and walked away.

This baby has to be mounted higher on the building, off the ground where it is difficult to reach…and fairly difficult to install, unless you have a small scaffold. 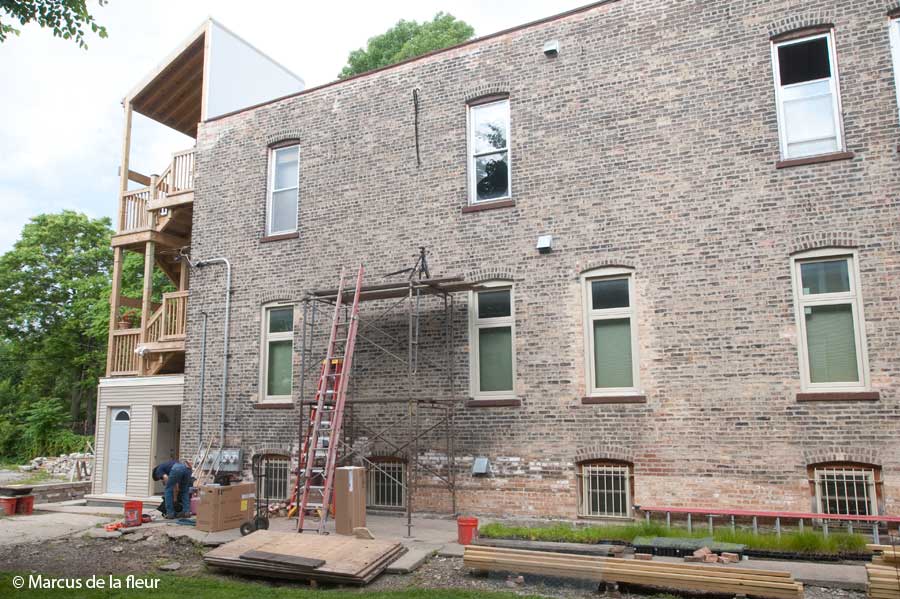 Fortunately, there are convenient wall mounting brackets for the minisplit, which we anchored into the exterior brick wall. Our installer, James Pruyn, fixed the outdoor unit on the bracket arms and connected the supply and return cooling lines we had roughed-in a couple of years back.

And then there was the electrical connection. Our 12,000 Btu minisplit runs on 220 volt, not the typical 110 volt. When I roughed-in the cooling lines, I also made sure to run an electrical conduit from the circuit breaker panel to the building exterior. I also had set aside two slots in the circuit breaker that would give us the needed 220 volts. All that was left to do was to install an emergency disconnect on the outside, pull the electrical cables through the empty conduit, and connect the cables to the minisplit.

The outdoor unit comes pre-charged with R410A refrigerant. But before we could charge the whole system (cooling return and supply lines and indoor unit), we needed to remove any remaining air and moisture. James connected a vacuum pump to the minisplit, and from then on it was a waiting game, as we waited until there was sufficient vacuum pressure. 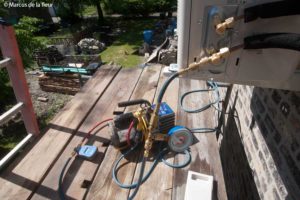 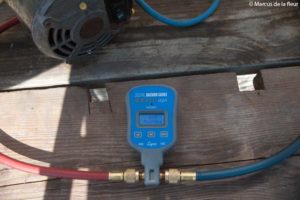 Thinking ahead and taking a little gamble sometimes pays off.

I had to decide on the location for the outdoor and indoor unit. I was advised to place the indoor unit in a central location, yet fairly close to the ERV return. The south wall of the dining room met those requirements and had the wall space to accommodate the indoor evaporator. 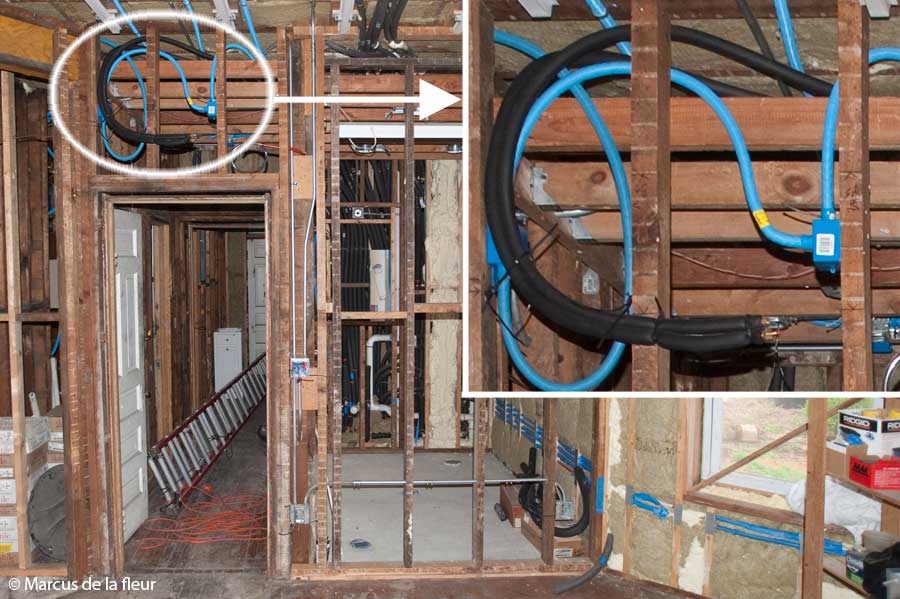 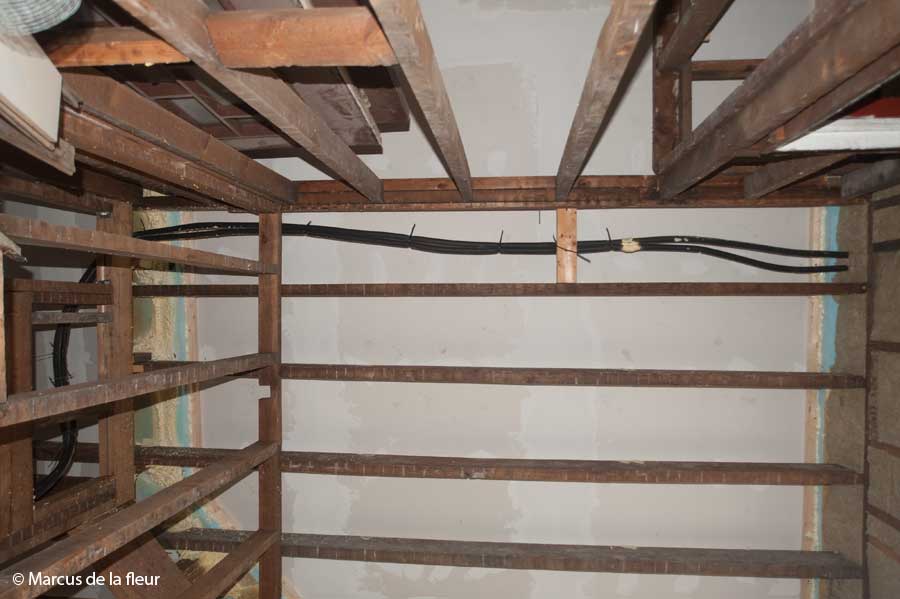 An additional advantage of mounting the indoor evaporator on the south wall of the dinning from was that the bathroom plumbing was right around the corner.

Similar to an air conditioning window unit, the indoor evaporator produces condensate when in cooling mode. This is exactly what we want, because this process is reducing the overall indoor humidity. But I also had to figure out a safe way of discharging the condensate. This is where the bathroom proximity came in handy. 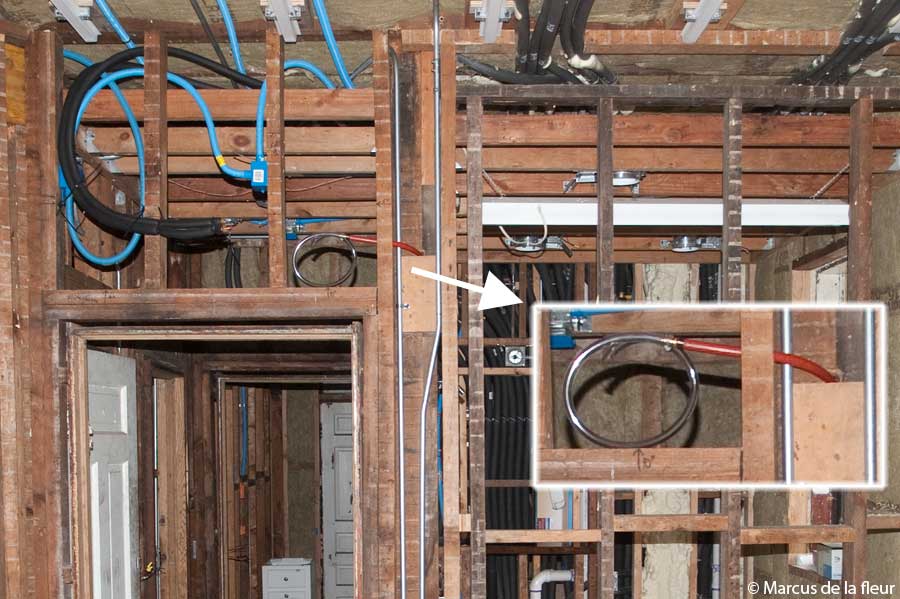 I ran a half inch Pex line from the indoor evaporator location over to and down through the bathroom wall. I pointed the line toward the shower drain and terminated it a couple of inches above the bathroom floor. 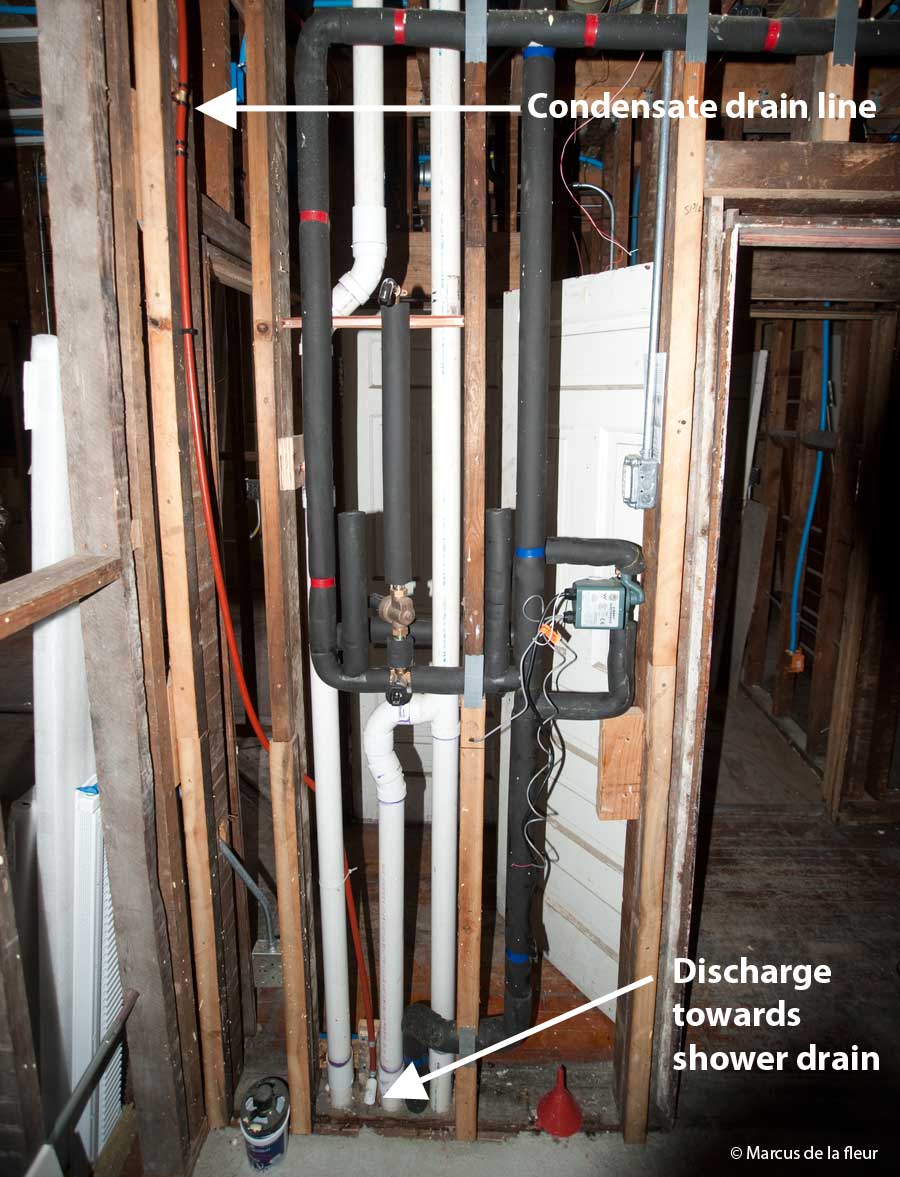 This way, all condensate is safely discharged into the shower and then drains through the shower drain.

The minisplit was the only cooling option in the picture at that time, and I am glad I opted for the rough-in. It would have been a shame to open up the drywall after everything was finished.