I alluded to the almost happy ending of the pocket door installation. Almost, because we had difficulties to get the roller mechanism to run smoothly. In other words, the pocket doors had a tendency to get stuck.

I was aware of it when we started installing the pocket doors, and attributed the problem to the roller mechanism itself. 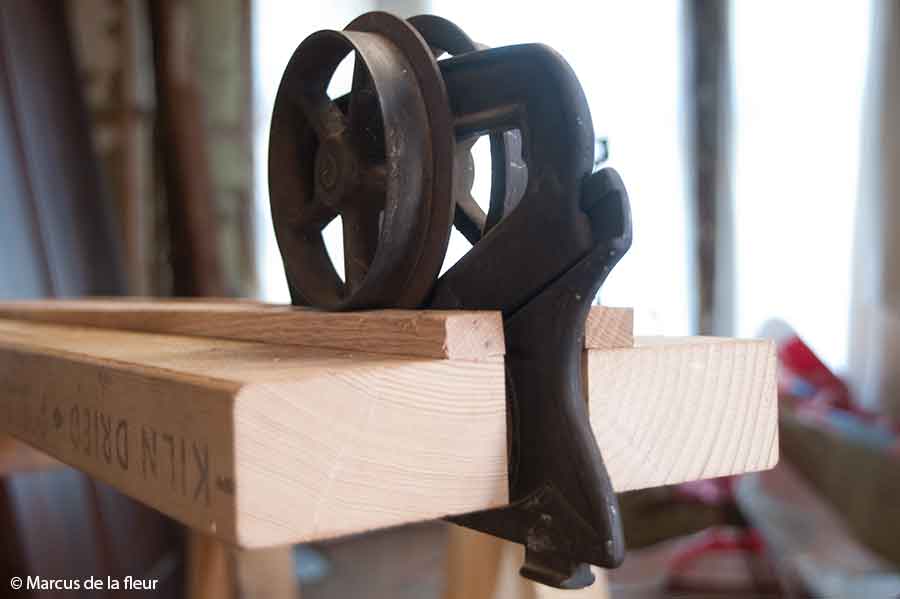 There were a lot of metal on metal moving parts and my hope was that greasing the bunch would solve the problem – which it didn’t. It turned out that the metal components had nothing to do with it, and the issue was the wooden rails on which the wheels run.

Framing is not an exact science, and although it looked like the left and right rail were at the same elevations, they were not. If one rail is a fraction lower than the other, the whole wheel mechanism is tilted to one side. 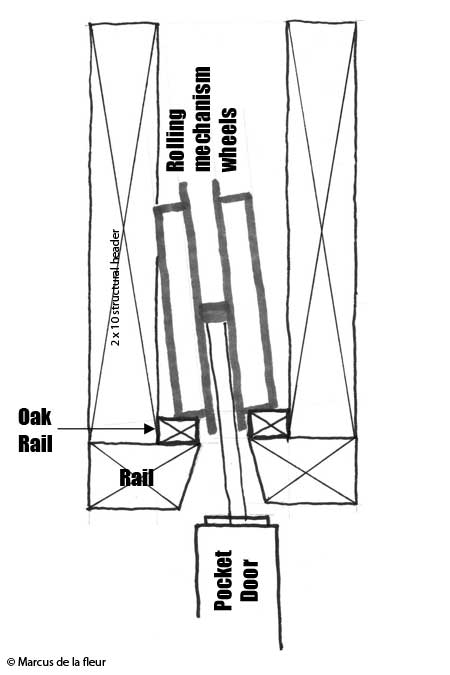 Because the structural two by ten headers sit right next to the rails, the tilted wheel mechanism was scraping along the lumber to the point where the pocket door felt stuck.

Once Drew and I identified the problem, we fit a thin piece of oak onto the lower rail. It brought it up to the same elevation as the other rail, et voilà, no more tilting of the roller mechanism. 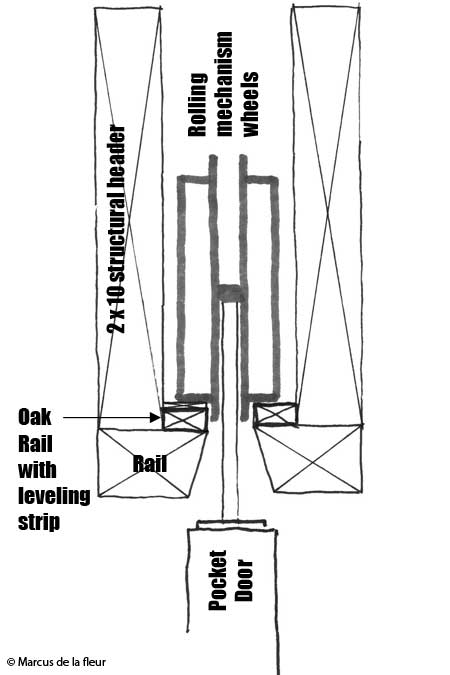 And the result was no more pocket doors that got stuck.

We have to see how long this success will last. Framing lumber has the tendency to move with the seasons and humidity. What was level in April may not be level anymore in July. 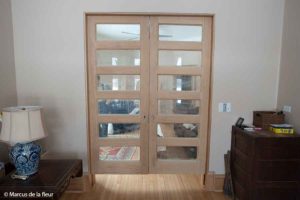 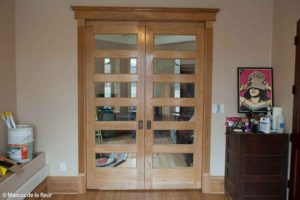 In any case, we now have refinished, fitting and functioning pocket doors. May be one day, we can afford to replace the plain glass with stained glass.

Shortly after I published the last blog entry about the pocket door installation, Rob posted a question in the comment section:

“Until now we’ve ruled out installing pocket doors for our house because we thought light switches would get in the way. Have you had to deal with light switches here?”

This is great material for another blog post! And the answer to Rob’s question is: 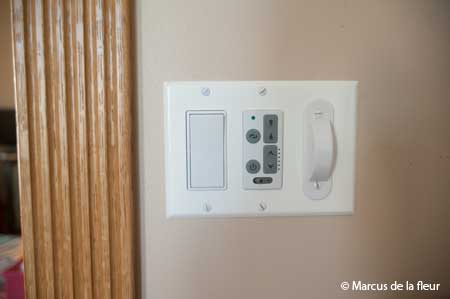 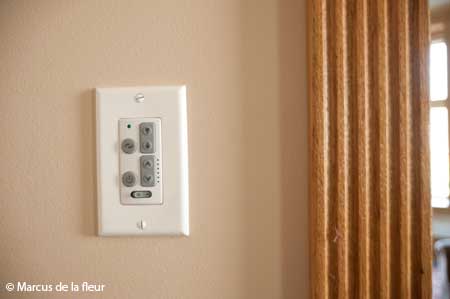 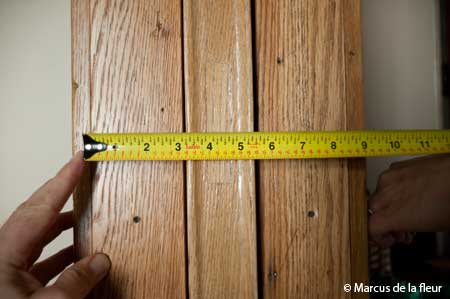 I did not reinvent the wheel, nor did I really think about this. When I rebuilt the framing for the pocket doors, I kept the original wall depth, which was seven and a half inches from stud to stud (or eight and three quarter inches if you count the five eighths drywall on either side). 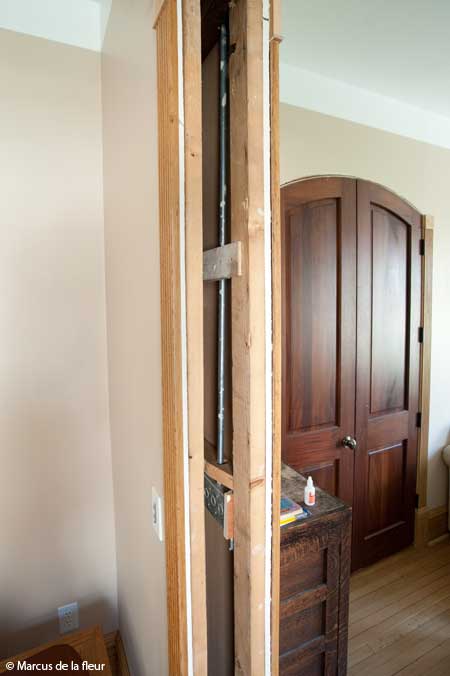 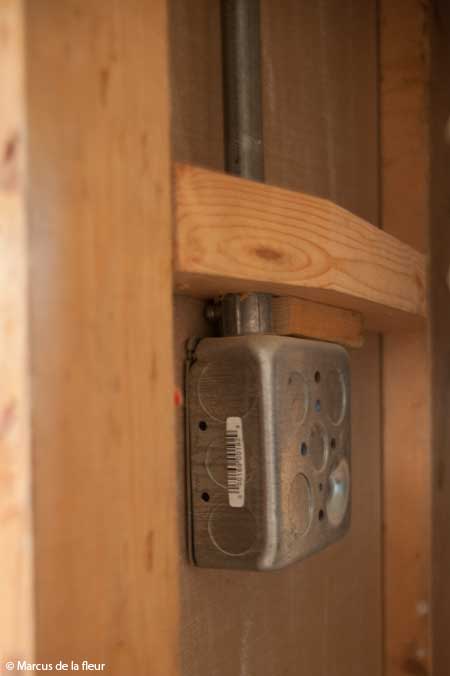 The only challenge emerged around the pocket door header, which also holds the rolling mechanism. We knew we couldn’t run the conduit inside the header, where it would interfere with the doors. To solve this problem, we did some planning ahead and offset the header three quarters of an inch into the wall. That gave us the room we needed to again run the conduit right behind the drywall and thus avoid any interference.

Once we were above the header, we kicked the conduit back to have enough room to make the 90 degree turn into the ceiling. Problem solved – and I hope questions answered.

We had taken care of the basic pocket door preparations a while back: the framing. We have the intimidating task behind us: adding the extensions to the pocket doors. All that is left now is the heavy lifting: Installing the pocket doors.

And the heavy lifting is meant literally, because those suckers weigh a pound or two.

The doors came with the original roller mechanism, and I built the new framing with an oak rail to match it. 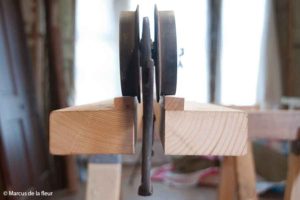 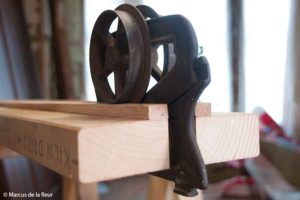 Right in the middle of door opening is a 12 inch section of oak rail that can be removed. 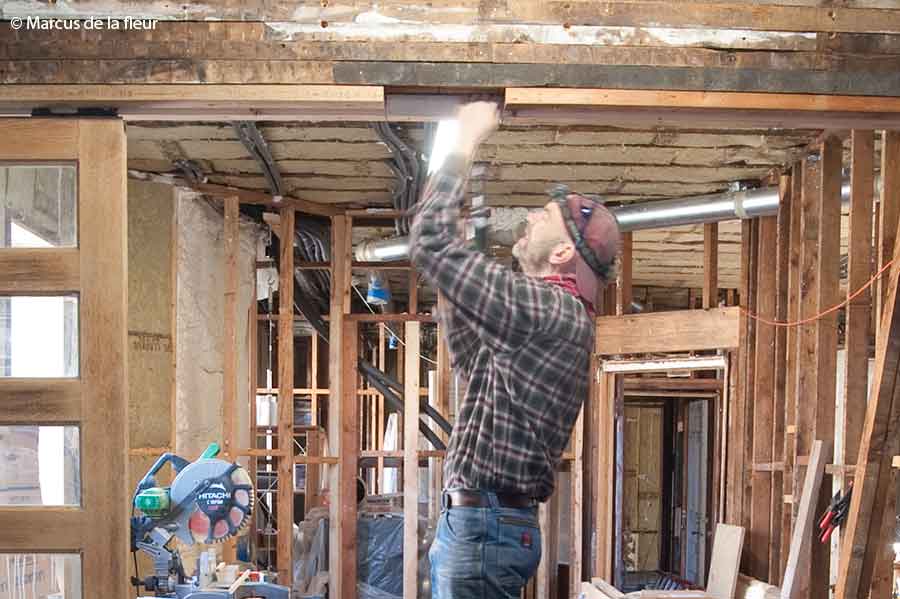 That is where we lifted to doors into place, attached the rollers, and slid them onto the rails.
Once both doors were put up, we re-attached the 12 inch removable section, and thus closed the gap in the oak rails.

We also had to install a door stop, which prevents the pocket doors from sliding past the framing. It’s a small piece of oak, a little wider than the doors, that catches on the back of the door buck. 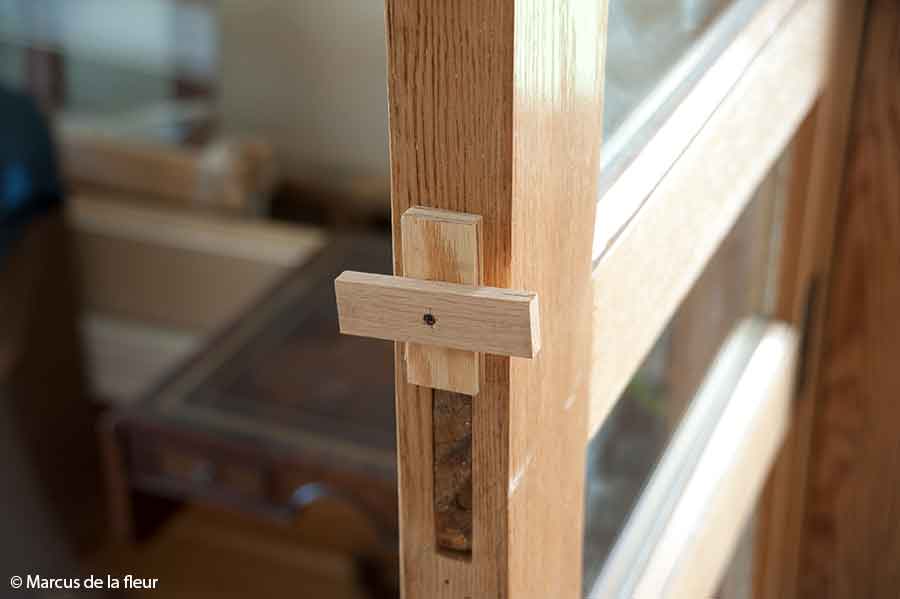 The trim that goes around the door had been restored and lacquered for a while. Now was the time to put it up, delivering the finishing touch.

That’s a happy ending, right? Except that we had difficulties to get the roller mechanism moving smoothly. That prompted Drew to comment: “This is why people threw their pocket doors out. They always got stuck!”

I finally got around facing the intimidating task of adding extensions to the bottom and top of our replacement pocket doors. And because our friend Drew plays the enabler, there was no starting the job without him.

The top extension holds the rolling mechanism and has the rest of the door hanging on it. And those doors are heavy! To prevent the them separating from the extensions, we had to rely on some sturdy hardware and a fair amount of wood glue.

We also made sure that the extensions were a tiny notch wider than the door. That allowed us to sand them down and have a perfectly smooth transition between the old and new.

The finishing touches were followed by lacquering the doors. Of course we used a water based and VOC free product (Acrylacq by AFM Safecoat). While the lacquer was curing, we could start thinking about hanging the doors and getting the rolling mechanism to work.

The good old pocket doors – they have been weighing on my mind a lot and for a long time. 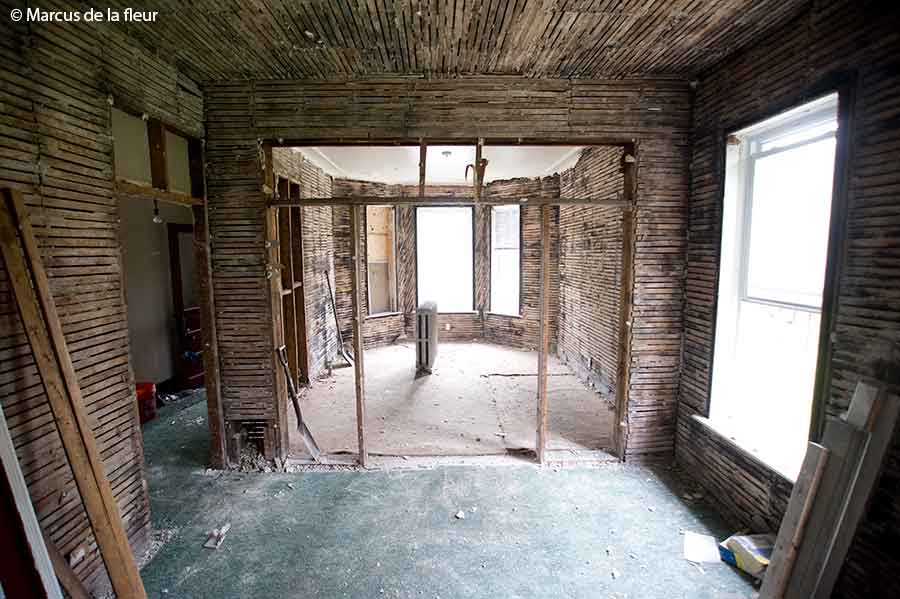 Finding antique salvaged pocket doors is an expensive proposition. But good fortune sometimes comes with time. And after checking Craigslist for about a year, we found an affordable pair of pocket doors we liked. A down side to the doors: they were painted and needed stripping. 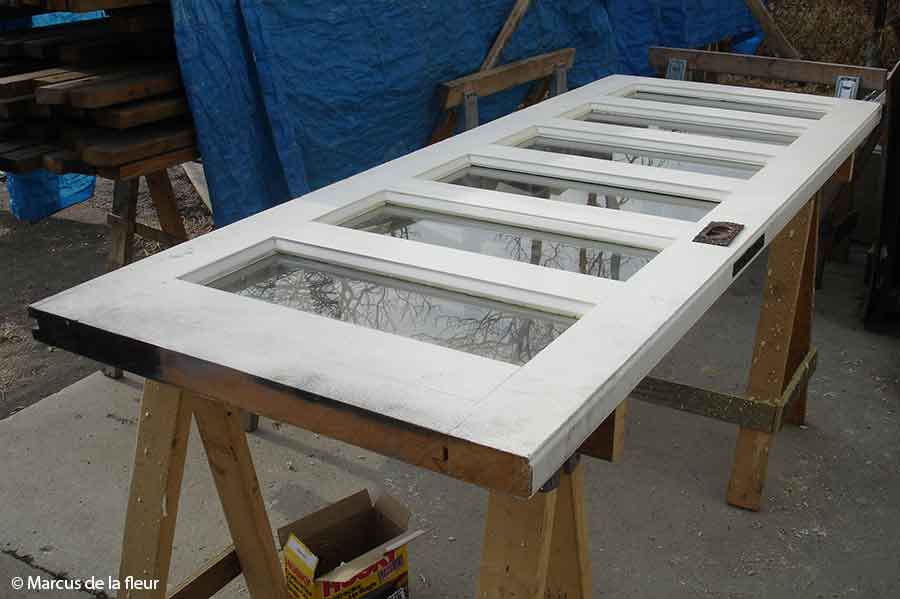 With the pocket doors in our possession, I now could adjust the framing to fit the new doors. Along with it, I built a rail system that matched the original rolling mechanism of the doors.

So far so good. But another down side of the pocket doors was that they were a notch too short. I refrained from lowering the height of the doorway to fit the new doors, because there was a pleasant consistency in the doorway height throughout the unit. Altering that didn’t seem right. 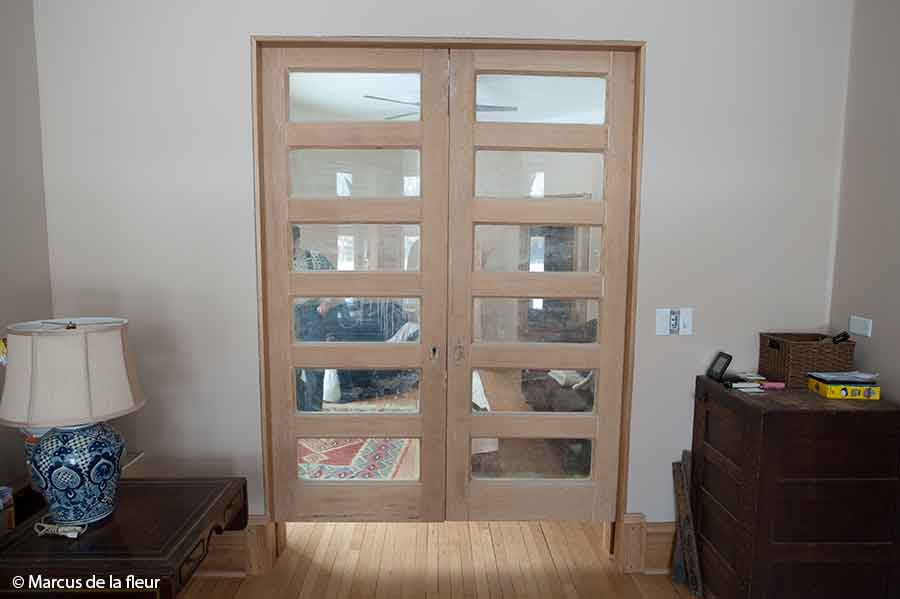 I have been tiptoeing around adjusting the doors, i.e. adding an extension to the top and bottom to make them fit, mainly because it seemed an intimidating task that if not done right could ruin the set.

But there is no longer any avoiding it, and our friend Drew insisted that it would all work out just fine.