I talked about installing the insulation on the roof deck in a previous post. There was one small but significant trailing task that I could not ignore.

Our two layers of 1 ½ inch of polyiso were contained around the edges by the parapet. The exception was the lower roof end, where the main roof transitions to the back porch roof. Not only was there nothing to contain the insulation, but I had a small drop between the two roofs.

Bringing the insulation all the way up to the main roof edge did not seem a good idea. That edge acts like a step each time someone accesses the roof. Although the polyiso boards were pretty ridgid, they are not a material that’s suitable for steps.

The solution: Take two 2 x 8 joists, lay them flat on the roof edge so that they come up to the same height as the insulation, just as we did with the solar blocking installation. And we anchored the two 2 x 8’s into the masonry wall below. We referred to this assembly as the roof end blocking.

Hard 90 degree turns on roofing membranes are not recommended. They are subject to material fatigue and failure. That is why our roofer Pablo used a cant strip all the way around the parapet edges. Rather than folding the membrane up once at 90 degrees, we were folding it up twice at 45 degrees over the cant strip.

We used the same principle for the edge of the roof end blocking. I took the circular saw to the upper 2 x 8 and cut a chamfer to it. This way we can carefully apply the roofing membrane over the edge with two 45 degree folds.

This is all we could do at this point. But we needed to install another roof end blocking over this first one. More about that later.

Nope, I am not trying to block the sun, but this is a good reminder that the whole roofing project was happening because we were getting ready to install a photovoltaic array on our roof. And one question to resolve was: How should we attach the solar panels to the roof?

Some systems are weight based, meaning they are not physically attached to the roof structure, but instead weighed down by concrete blocks, for example. This method has the advantage that there is no hardware that penetrates the roofing membrane. The disadvantages are that the roof needs to be able to accommodate the extra weight, and more importantly that the City of Chicago would not permit weight based systems, according to my solar installer.

We needed to come up with a solution to anchor the solar array to the roof joists.

If you look at the plan sheet above, you can see that almost none of the posts (red dots) line up with the roof joists (dotted line going from left to right). So, anchoring the posts directly into the roof joists was not an option. Instead, we planned to indirectly anchor them. We installed and anchored three rows of blocking that was running perpendicular to the roof joists (the dotted line running from top to bottom), to which we could anchor the posts.

The blocking consisted of two two-by-fours laid long side down, stacked on top of each other, and anchored into the roof joists.

This solution had to fit into our new roofing system. That is why we used two layers of 1 ½” polyiso boards, so that the insulation would be flush with the blocking for the solar posts and ease the installation of the roofing membrane.

I had marked the layout for the solar blocking right after the roof tear off and kept track of it during the insulation installation, including where to anchor it to the roof joists. I cut and removed insulation and laid out the two-by-fours. I made sure to stagger the joints between the bottom and top row. I also made sure that no joint was over a roof joist, or at an anchoring point for the posts.

After I had the two-by-fours anchored down I foamed around the edges to keep the insulation assembly sealed.

I only had two major snafus on this project, both self-inflicted. One had to do with the roof insulation – or – to be more precise, the attic insulation.

I did an excellent job insulating the attic, first with rock wool followed by foam board. And in that process I created a cold roof deck. A cold roof deck during winter runs the risk of getting wet over the years (for more information go to: Do-over dilemma).

With the old roofing torn off, I found to my delight a bone-dry roof deck. Maybe this was an indicator that the risk of a cold and wet roof deck was marginal, but nevertheless I’m glad I made the decision to sandwich the roof deck between layers of insulation (rock wool below and foam board on top) to keep it warm.

What type of insulation to use?

I used a fair amount of salvaged extruded polystyrene insulation (XPS) on the project and thought of using it on the roof too. But my roofer, Pablo, balked at that idea. I quickly realized that all the roof insulation I ever saw was polyisocyanurate insulation boards (or polyiso in short). And there is a good reason.

Although I didn’t find any independent publications, articles from the roofing industry and manufacturer associations indicate that polyiso is fairly fire resistant and does not melt and drip like polystyrene. That is a rather important factor, considering that we planned to install a modified bitumen roofing system, also known as torch-down roof. And as the name suggests, it involves a torch and heat. So having fire resistant insulation boards is – let’s say – imperative.

The downside of polyiso insulation is its cold weather performance. To quote Martin Holladay from Green Building Advisor:

“At temperatures below 50°F, polyiso performs worse than it does at a mean temperature of 75°F”

When I was sitting at the roofing material supplier to order the materials for our project, the price for the polyiso boards was less than I expected, which made me suspicious. After combing through the material specifications, I realized that the boards in questions had a cardboard based facer.

Unlike XPS or expanded polystyrene (EPS) insulation, polyiso always comes with a facer on both sides. The facers contain the foam core during the production.

Having a cardboard facer, which runs the risk of disintegrating or deforming when it comes into contact with moisture, was not acceptable in a roofing situation. And the potential flammability of a cardboard backing may negate the fire resistance the polyisocyanurate provides. A fiberglass facer would be the material of choice. Slightly more expensive and a special order item (because most roofers don’t want to spend the extra money), but moisture resistant, dimensionally stable and safer.

We installed two layers of 1 ½ inch polyiso boards across the roof. I did pick 1 ½ inch boards because they fit with the solar blocking, but more about that in a later post.

To maximize the thermal performance, we staggered the joints of each layer. The polyiso boards, like most materials, expand and contract with rising or falling temperatures. When contracting, the tight butt joints may morph into a slight gap, which would allow thermal energy to escape. By staggering the joints, I have at least another layer of foam board over that gap that would slow that escape.

We fastened the boards mechanically to the roof deck so that they don’t blow away and are a solid foundation to which we can adhere the roofing system. To do so, we used long insulation screws with insulation washers.

We have, what you would call, a typical low slope roof. What is not so typical is that the bottom of the slope is blocked for about 12 feet by our staircase extension. To prevent water from ponding up against the extension, we added some tapered insulation to add a slope that would allow for positive drainage.

Going through our deep energy retrofit in phases has allowed us to fine tune along the way where needed.

But the sound management doesn’t have to end here. We can further soundproof the wall between the ventilation closet and bedroom with the magic material I alluded to in my last post: rock wool. 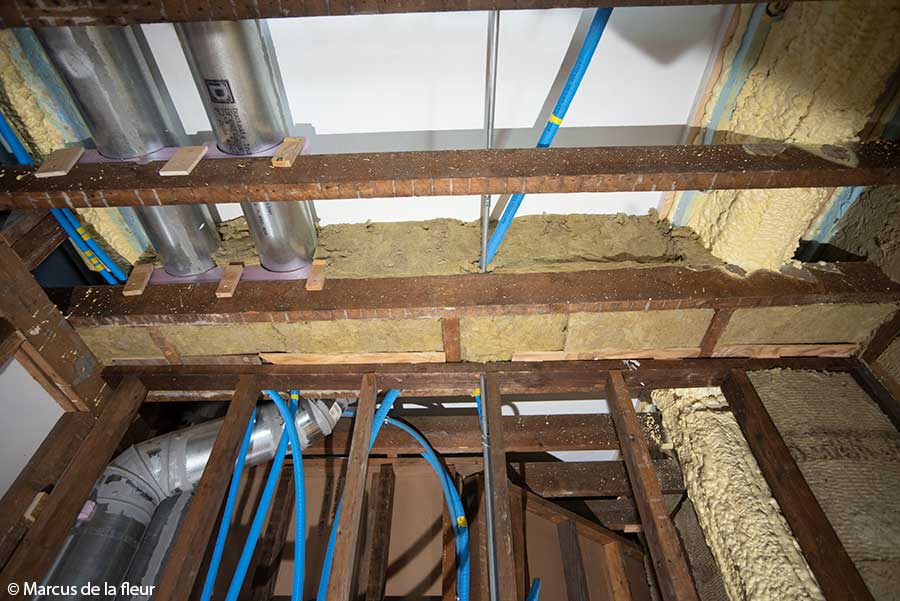 I started the process before we installed the ceiling drywall by blocking the small attic space. That should prevent most of the ERV noise from travelling across the bedroom ceiling. The next step was to fill the wall framing cavities.

The beauty of rock wool is that it doesn’t only provide sound insulation, but also excellent fire protection and thermal insulation. We used rock wool for these latter two properties in the ceilings and all exterior walls. But for the wall between the bedroom and ventilation closet, we were mostly after its sound insulation properties.

Thermally speaking, our staircase from the front door to the 2nd floor unit is “un enfant terrible.”

Because of dimensional deficits due to the existing staircase, the envelope insulation along the 1st floor level solely consists of two inches of closed cell spray foam. 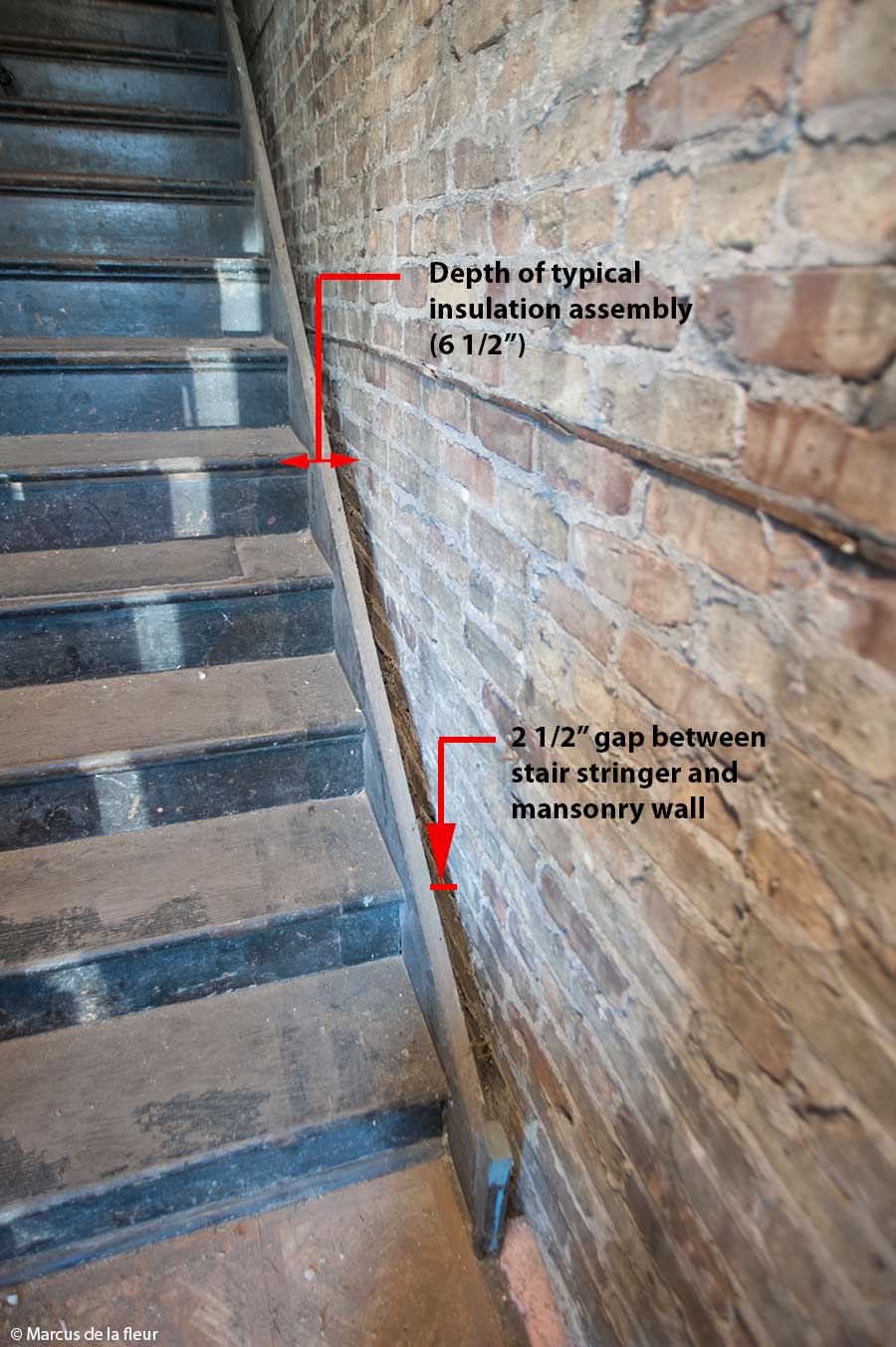 This may sound pretty potent to some, but with a wall insulation goal of around R24 to R30, two inches of closed cell foam is merely mediocre. The staircase will always be cooler in winter and hotter in summer than the adjacent interior spaces. Because it’s a transit space it doesn’t matter that much, with the exception that it has a negative impact on the thermal load of the adjacent rooms.

To solve this shortcoming, we separated the entire staircase into its own thermal unit that gets insulated on all sides. This in combination with air sealing should compensate for the inept exterior insulation along the 1st floor level. 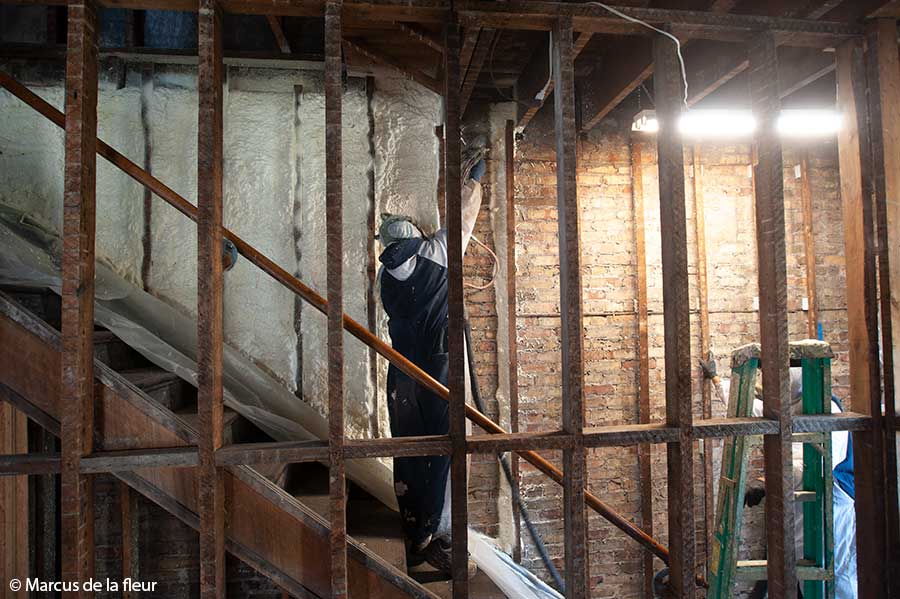 To get there, we installed two inches of the closed cell foam along the 1st floor and 2nd floor exterior walls. 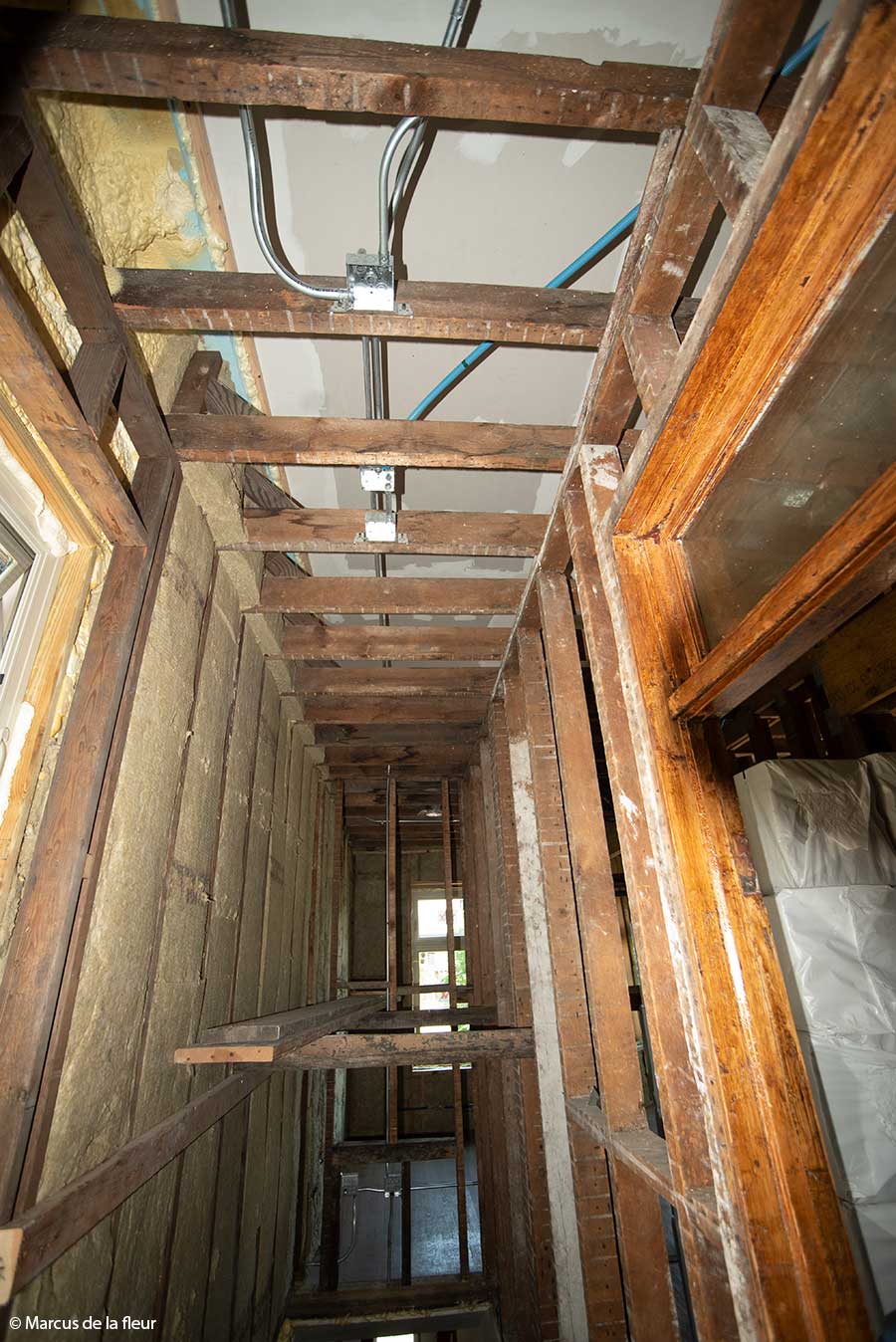 Because the exterior masonry wall on the 2nd floor narrows from three to two wythes, we ended up with enough room to switch from the 1st floor furring strips to regular framing along the 2nd floor level. We filled all those framing cavities with rock wool, adding another R15 insulation value. 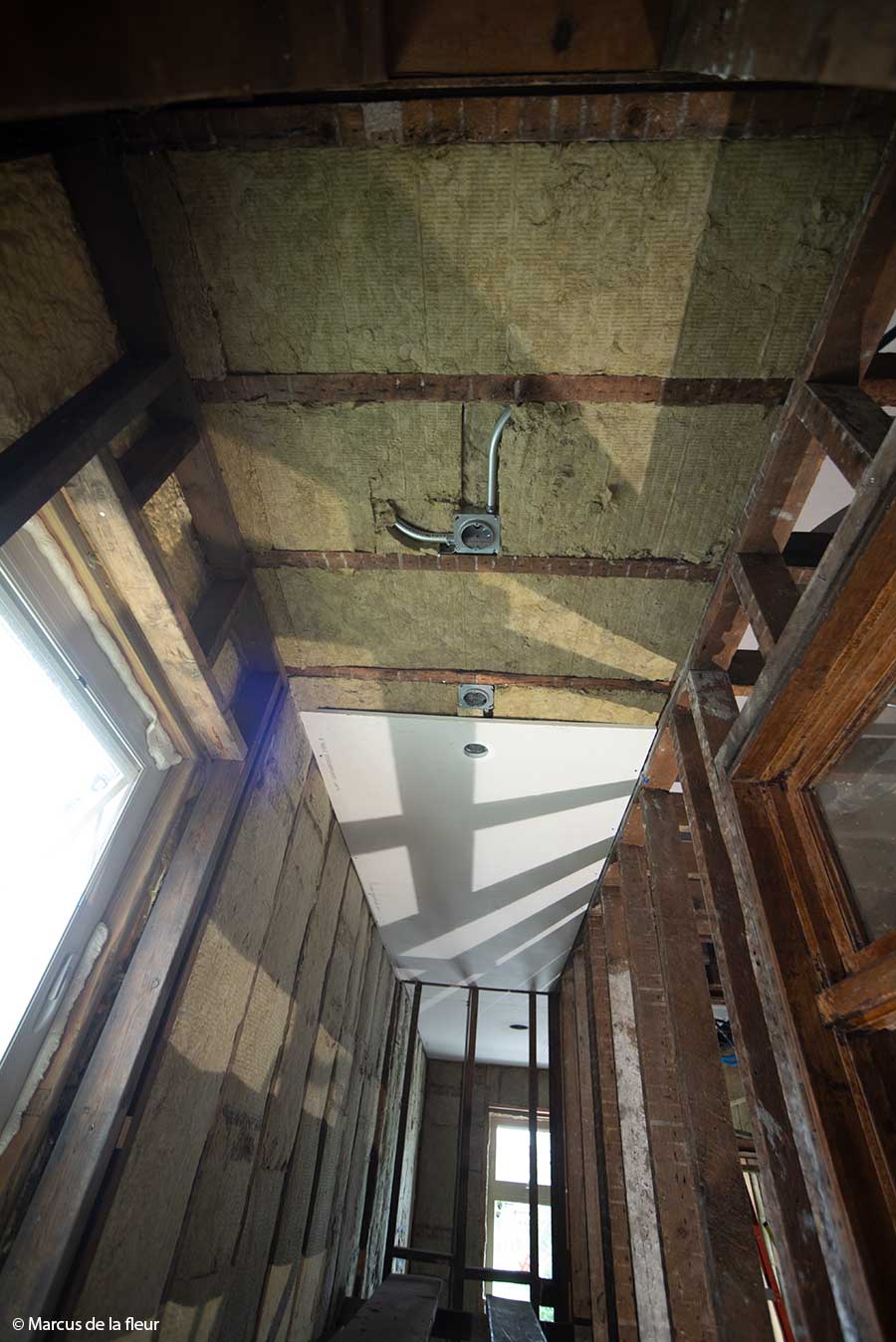 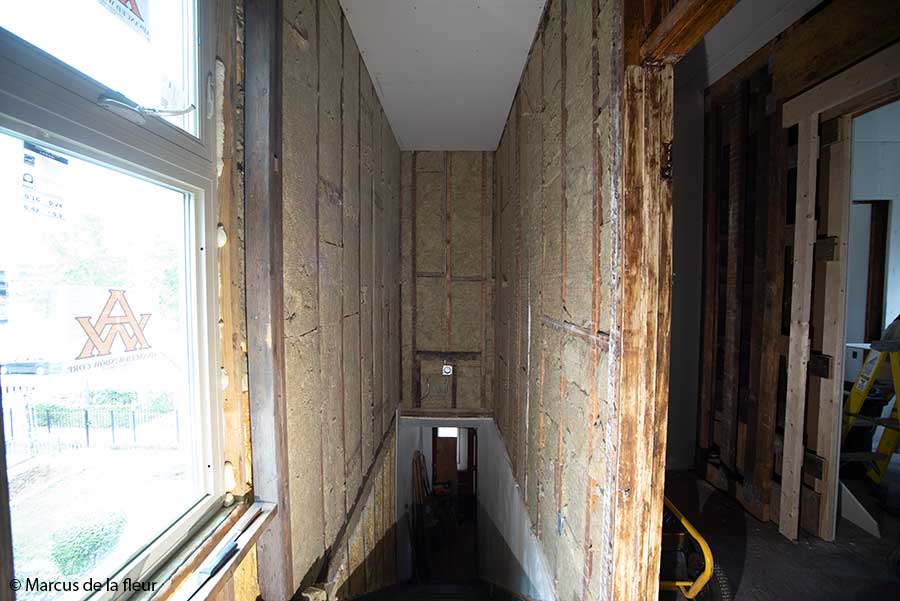 … and all framing cavities of the flanking interior walls.

Thermally isolating the staircase by surrounding with with an added insulation value of R15 (less at the framing studs) wasn’t the ideal solution, but given the restrictions, it was the most practical process towards minimizing thermal inefficiency.