Although I usually enjoy writing blog posts, this one doesn’t necessarily fall in the “fun” category. I am talking about my well intended roof insulation that required a partial do-over.

I did a very thorough job, starting with rock wool insulation between the roof joists, followed by four inch thick XPS foam board that we mounted under the roof joists and then airsealed with close cell spray foam. I subsequently discovered that my insulation assembly was upside-down and that I had created a cold roof deck. So I started the process of removing the carefully installed XPS insulation, which ultimately should be installed on top of the roof deck.

With the XPS insulation removed, I needed a new vapor permeable air seal. It needs to be vapor permeable to allow for seasonal drying of the roof assembly. Out of the handful of methods available, using half inch drywall in place of the XPS boards seemed to be the simplest and most reliable solution.

Once we had the drywall mounted under the roof joists, I made sure we mudded and taped it carefully to create an effective air barrier.

To seal the edges, I installed two by twos with a small gap that I filled and sealed with foam. 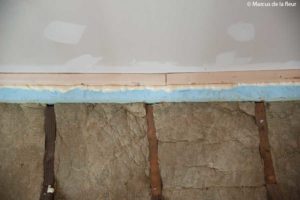 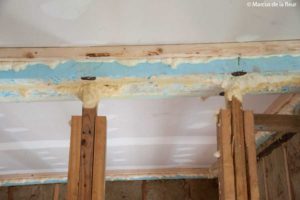 With my new air barrier in place, I started rebuilding the ceilings where needed and then I moved on to installing the ventilation duct work.

Advancing on the attic

Project specific factors usually determine what insulation method would be suitable. For our roof those factors were a target R-value of 60 or more, the existing low slope roof with its ten inch roof joists, the spatial constraints of the south attic, and the need for some roof deck repair down the road.

We reconciled these sometimes conflicting factors with an insulation assembly that started with three layers (total of 10 1/2 inches) of rock wool batts (R-45), followed by four inches of XPS foam boards (R-20). That should give us an R-value of 65 anywhere between the roof joists.

It looked like we had the perfect roof insulation for our project. Yet, it was also risky, which suddenly made it a lot less perfect.

What I neglected to consider in my schedule and material driven decision making, was the building science – the issue of moisture management.

From cold to wet to rotten

The current insulation assembly is so effective that I created a cold roof deck. During winter time, its temperature will be close to the outside air temperature. In other words, it will be around or below freezing.

Any water vapor in the assembly is likely to condense at the cold roof deck – or, to be more precise, the water vapor will be absorbed by the boards and the upper (cooler) sections of the roof joists.

That could drive up the material moisture content. Once the moisture content rises above 28%, rot or biodegredation may set in. This could compromise the structural integrity of the roof deck and roof joists.

We did fairly successfully airseal the 2nd floor, including the roof plane. That is, however no guarantee that the roof assembly is vapor tight. Plus the stack effect will constantly pound the insulation assembly with warm and moist air. Some of it will get into assembly. But I am not sure if it has an effective way to get out again.

The accumulation of moisture in the assembly would probably be a slow and gradual process. To get to and sustain a risky moisture content would probably take years. So should I lose sleep over it?

Yes. And I already lost a lot of sleep over it! We plan to be in this building for many years to come. The aspect of durability is very important to us. It makes economic sense and is sustainable. Plus we plan to put us a green roof. I don’t want to ignore the problem now only to risk costly structural roof issues 5, 10 or 15 years down the road.

Our current insulation assembly is upside down. If I move the XPS insulation on top of the roof deck, I should be able to keep it warm enough to reduce the sorption risk (often referred to as condensation).

The rock wool insulation can stay in place as is. It is vapor open and allows for seasonal drying of the now much warmer roof structure. With that, the moisture content of the roof deck and roof joists should remain in the safe zone, which would be below 20%. (Mold growth is likely to occur if the moisture content is in excess of 20%)

I don’t like doing things twice. But in this case it is the lesser evil. I will now spend a few days taking down our carefully installed XPS insulation. Reinstalling it atop the roof deck will happen sometimes down the road. 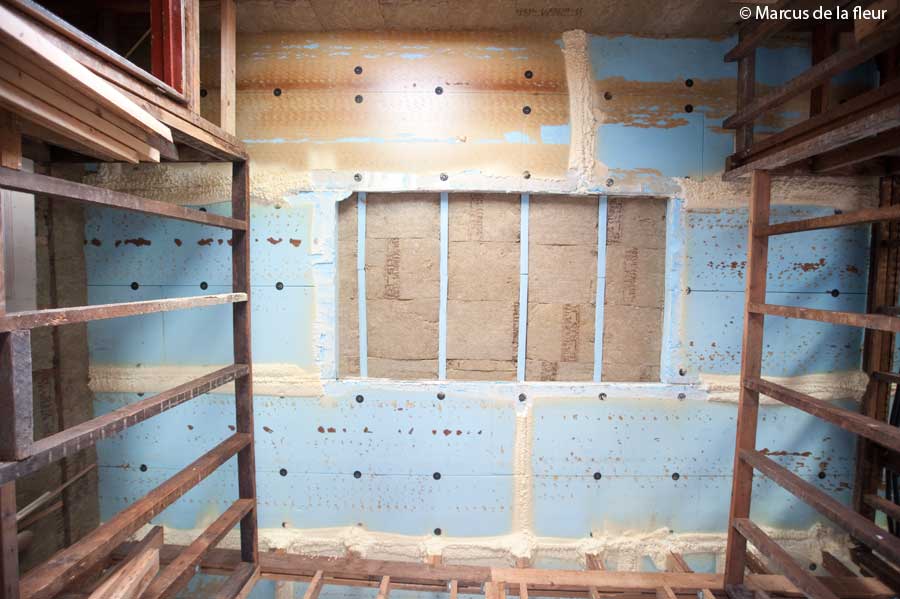 Trying to determine how to insulate or ventilate a roof isn’t easy. Here is a list of articles that guided me in the process:

The closed cell spray polyurethane foam (SPF) came in handy while solving a problem with the attic insulation.

We used salvaged four inch XPS boards under the roof joists in the attic. Because salvaged material is rarely perfect around the edges, I was left with gaps where the boards meet. 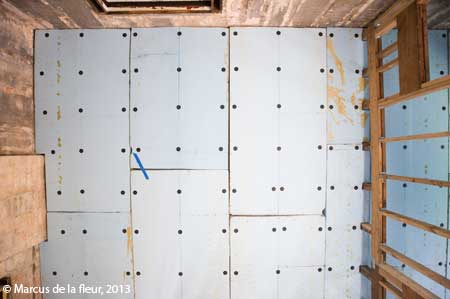 These gaps needed sealing to prevent warm air and moisture from migrating into the insulation assembly. The associated energy loss — and even more so the wetting of the roof assembly — would be counterproductive or even dangerous.

Taping over those gaps didn’t seem feasible. I thought about using spray foam cans to fill the gaps. That would would be a big and expensive job.

Sealing the seams with closed cell SPF, however, is relatively straight forward, particularly with our installer and his attention to detail. 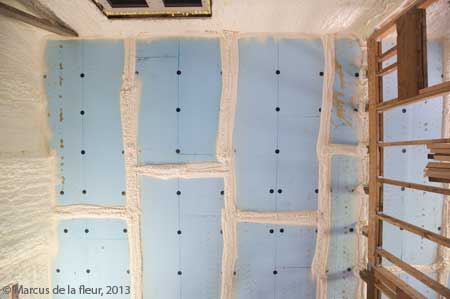 During the SPF installation, the installer “over sprayed” the top of the wall to properly seal the interface between the XPS boards and the masonry wall. From there he moved on to the ceiling, and sealed the joints between the boards with foam.

I got the gaps between the boards closed up. But it doesn’t entirely solve the problem of air or moisture from migrating into the roof assembly. There will always be some imperfections, leaving small pathways. My plan to manage that moisture is a good subject for another blog post.

The attic is stuffed with rock wool, but that is only two thirds of the story.

The other one third is the XPS foam board insulation that is mounted to the bottom of the roof joists.

We had narrowed the material choices down to foam board, either XPS or ISO. This wasn’t the challenge. But where to find the material for a reasonable price, and at what thickness, was.

Let’s break this down.

We needed a total of four inches of foam board insulation under the roof joists. Working with four inch thick foam board would be the most efficient and require the least handling. Two inch foam board is much more common, but would require twice the amount of handling.

Salvage with a capital S

You would think that the well of good fortunes on this project had dried up by now. Yet it still had a little surprise in store for us.

While scouring the salvage markets for insulation and reaching out to my fellow green building nerds, I landed a positive response from our friend John Edel. He is working on his own sustainable building and manufacturing project, called The Plant, and was trying to find a good home for a whole bunch of salvaged four inch XPS foam board insulation. 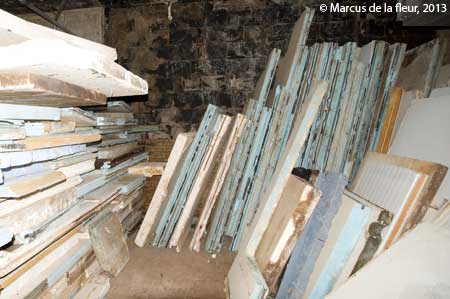 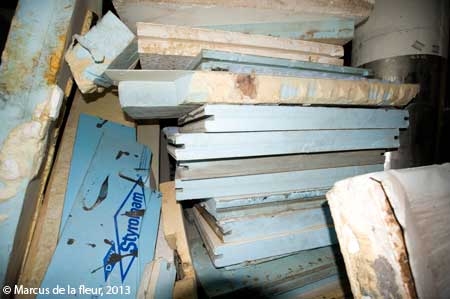 The insulation came from the walk-in coolers and smokers of the old meat processing plant, which he now is converting into a urban food production hub. The XPS insulation was faced on both sides and ideal for the attic. Not only that, but he actually had enough boards for us to finish the job. 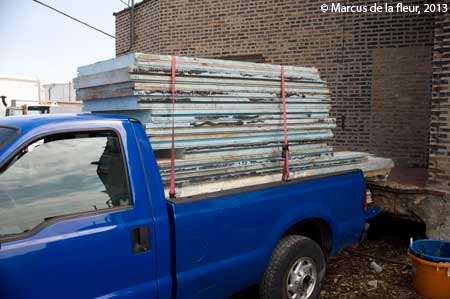 The four-inch boards required the least amount of handling – but we still had the maneuvering issue to deal with. The only way to get the boards into the attic and under the roof joists led past the ceiling joists. We had to be strategic about what board sizes we could fit through the ceiling joists into the attic and how we staged the installation without boxing us in and leaving attic sections inaccessible.

The rear section of the attic was again easier to manage as we had no ceiling joists in the way. We still had to be strategic about the staging and mindful about the fitting in the corners and around the vertical blocking.

How did we attach the four inch boards to the ceiling joists?

We pulled the facing off one side of the boards. That side (the blue side) faced down.

I purchased a large box of two inch diameter plastic washers, specifically developed for foam board insulation installation. The washers have two small prongs that allow us to push them into the foam board where they stay put.

I also purchased a large box of 6 inch screws – a special order over the internet. The screws were long enough to reach through the four inch boards and the 1/2 inch XPS strips under the roof joists. That left me with 1 1/2 inch that I could sink into the joists.

We got the attic toward the front of the building insulated, and with it I exhausted my annual allotment of crawling around. The center section of the attic had its own challenges with the space between the ceiling and roof joists becoming increasingly tighter.

Installing the rock wool between the roof joists toward the back of the building was a breeze. No crawling and no tight spaces, as we had removed the ceiling joists. Instead a wide open space with lots of freedom to move around.

Not only that, but we also had a process down that kept us moving along.

Harold, one of our neighbors, cut the rock wool batts to the sizes to fit them between the roof joists. To make the cuts quick, precise and easy, we had put together a cutting box with blocks that were used to adjust the dimensions of the batts in 1/2 increments.

With this system set up, on a good day we worked our way through ten bales of rock wool or 600 square feet of 3 1/2 inch thick batts.

Here is something that may make you giggle, but as German as I am, I have to throw it into the mix.

I attempted to be very particular when I calculated the total square footage of rock wool needed for the attic insulation. Too much rock wool left over would be a waste of money. Not enough rock wool would be – a pain in the behind.

I carefully subtracted the roof joist and roof joist reinforcements from the total interior roof deck area, and was delighted that we ended up with only 2 bails – or 120 square foot – left over. I felt that this was not bad considering a total of 3,880 square feet of rock wool batts that went into the attic. I take that 96.9076% accuracy rate any day.

(Would they give you an A for that in college?)